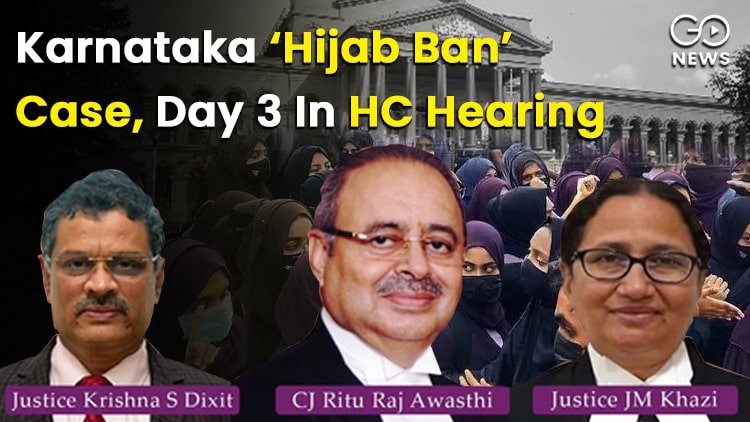 The Karnataka High Court on Thursday ordered students to not wear any cloth, whether Hijab or Saffron scarves, which can instigate people, till the matter is resolved.The Karnataka HC also stated that it will pass an order directing reopening of colleges. The court has also asked students to not insist on wearing such religious things till the disposal of the matter. "We are not Turkey, which says no religious symbols can be displayed in public. That hijab ban was upheld by the court due to that. But their Constitution is completely different. Our Constitution recognises different faiths," Advocate Kamat said."Ours is positive secularism. We recognise all religions," he added.
Also Read:
Karnataka Row: Muslim Girls Forced To Remove Hijab After Court's Denial Of Interim Relief


The three-judge bench comprising of Chief Justice of Karnataka High Court Ritu Raj Awasthi, Justice Krishna S Dixit, and Justice JM Khazi will continue hearing the hijab case tomorrow. As long as the matter is still with the court, students are allowed to attend classes without wearing any religious garments.Senior Advocate Ravivarma Kumar told the high court that Karnataka government has yet to take a decision on the uniform dress code. It is to constitute a high-level committee, as of now the government has not prescribed any uniform or prohibited the hijab, he said. The Karnataka government is likely to bring fresh guidelines for wearing hijabs in schools based on the High Court's proposal until the issue is in court. Karnataka Chief Minister Basavaraj Bommai and education minister BC Nagesh will meet the education and home department officials to decide on the guidelines.
The pre-university and degree colleges will reopen from tomorrow. Police are expected to announce security arrangements today ahead of reopening.