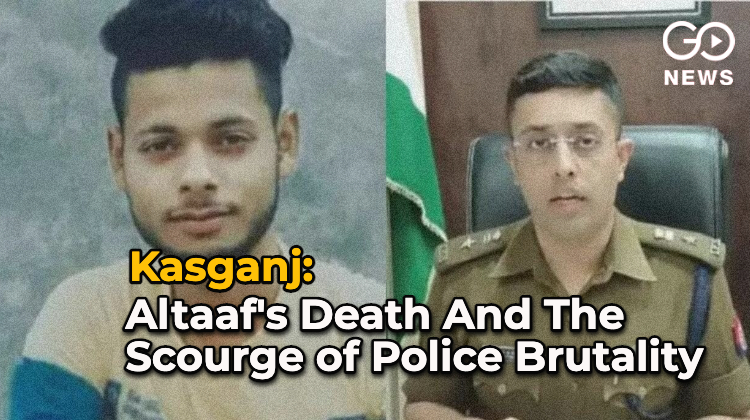 A 22-year old Muslim youth Osaib Altaf has died in police custody. He was arrested by UP Police for ‘kidnapping’ in an elopement matter. The police claims that the young man ‘hung himself’ in the police station’s bathroom with the string of his jacket’s hoodie, whereas Altaf’s family has plainly alleged that the police murdered their child in custody. The family says that they themselves handed over the young man to the police after it emerged that the matter was connected to elopement with a girl, and 24 hours after this, the police told them that Altaf had hung himself. Altaf’s father has levelled the grave allegation that the police hung his son to death.

In UP's kasganj, a youth Altaf was detained in the case of elopement of a girl. Later, he was found dead in custody in the police lockup. Father of the deceased alleged police foul play in the death of his son. pic.twitter.com/Fh5qs2uCXe

Also Read:
After 5 Years Of Demonetization, Public Says "In Cash We Trust!"

Altaf’s family members claim that Altaf was not presented before a magistrate after his arrest, whereas Kasganj Police Superintendent Botre Rohan Pramod says that Altaf was brought to the police station on Tuesday morning and not Monday night. Pramod claims “he [Altaf] asked permission to use the washroom during questioning. There, he attempted to strangulate himself by tying his neck to the tap in the bathroom using the string of his jacket hoodie”.

The official claimed that the police found him in an unconscious state that took him to the Ashok Nagar Community Health Centre in Kasganj, where he died after a treatment of 5-10 minutes. The police has said that the body of the 22-year old Altaf has been sent for postmortem, and 5 personnel have been suspended from duty for negligence. Custodial Deaths Becoming Extremely Common In UP Uttar Pradesh is one of the states where it has become almost “normal” to hear of deaths in the custody of police. Only last month in October, Arun Valmiki, a 30-year-old Dalit sanitation worker, was similarly found dead in police custody with his wife alleging that he was beaten to death in front of her. Valmiki had been arrested after a matter of the theft of ₹25 lakhs from the police warehouse had emerged. His family alleged that not only did the police kill him but also tried to frame them in false charges. Hundreds Of Deaths In Police Custody Each Year, Brutal Torture Perpetrated  Hundreds of people are killed across the country in police custody. The National Campaign Against Torture (NCAT) said in a report that in 2019-20, there were 14 custodial deaths in Uttar Pradesh. In 2020, there were 8 deaths in police custody in Uttar Pradesh. During this time, ‘model state’ Gujarat stayed on top with 17 registered deaths. According to the NCAT, prisoners and undertrials in jails are treated brutally and inhumanely. A member of the organization Paritosh says that during 2019, various methods of cruel torture in police custody were recorded. This includes hammering nails into the body, putting rollers on feet and burning them and beating the soles of the feet known as ‘falaang’. Other than this, victims were subjected to electric shocks, were doused with petrol, and were tortured by rubbing chilli powder on private parts. Other deplorable atrocities include boring the body with needles, branding it with hot iron, and urinating in victims’ mouths, which is a grossly bestial and condemnable act.