Delhi CM Arvind Kejriwal on Tuesday met with the Union Home Minister Amit Shah in connection with the CAA violence that rocked the capital for the third day runnning. Stone pelting and clashes were reported in multiple areas of northeast Delhi including Bhajanpura Chowk, Shiv Vihar and Ashok Nagar.  Shops were torched and people armed with rods and sticks were on streets in Bhajanpura, Chand Bagh and Karawal Nagar in northeast Delhi.
Also Read:
Pulses And Milk Consumption Falls Among Indians

Media reports claimed an angry mob raising incendiary slogans set ablaze a motorcycle in Maujpur, which witnessed excessive violence on Monday. Fire tenders were also damaged in Gokulpuri. Security personnel tried to disperse the people armed with rods and sticks but they also resorted to stone-pelting but the crowd which was more than the security personnel deployed in the area attacked them.  Media personnel were also attacked by armed mobs when they were reporting on a mosque being set on fire, according to media reports.  Section 144 has been imposed in the affected areas and the atmosphere of tension remains intact. Prohibitory orders have been extended till March 24. Schools in the area were shut and exams were postponed as the tension grew. 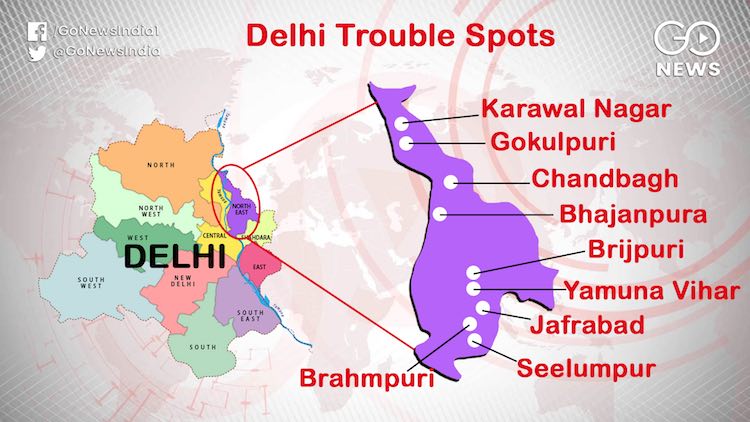 Five stations on the Delhi Metro’s Pink Line were closed for the second consecutive day on Tuesday in the wake of the trouble. After the meet, Kejriwal said the meeting was positive and all parties have stressed on restoring peace in the national capital. "Meeting with HM Amit Shah was positive and it was decided that all parties will take steps to restore peace," he told reporters after the meeting. "The police are doing their bit and HM has assured that whatever force is needed, will be provided," Kejriwal said. Earlier today, the CM had held a meeting with officials and MLAs of the violence-affected areas at his residence and called for several measures which need to be carried out.

Delhi CM @ArvindKejriwal on violence in Northeast Delhi says MLAs of the border areas have said there is a severe shortage of police force, people are coming from outside and there is a need to seal the borders and do preventive arrests#Delhiviolence #DelhiRiots #DelhiBurning pic.twitter.com/67U6WfqysY

Seven people, including a police head constable, were killed during the clashes between the pro and anti-CAA protesters in North-East Delhi on Monday, that left more than 100 injured. Jaffrabad, Maujpur, Seelampur, Chandbagh, Kardampuri areas of North East Delhi witnessed the maximum impact from the violence.  On Monday, houses, shops and trains were torched in Jaffrabad while a petrol pump was set on fire in Karawal Nagar.

Looting, #arson continue unabated in #NorthEastDelhi for the third day even after the meeting of HM @AmitShah, CM @ArvindKejriwal, LG #AnilBaijal and Police Commissioner @CPDelhi who assured of the situation being under control@ShahnawazMalik_#DelhiBurning #DelhiRiots pic.twitter.com/fvkwUx7dUL