Key Issues Missing; Clash Over Chandigarh In Punjab And Haryana! 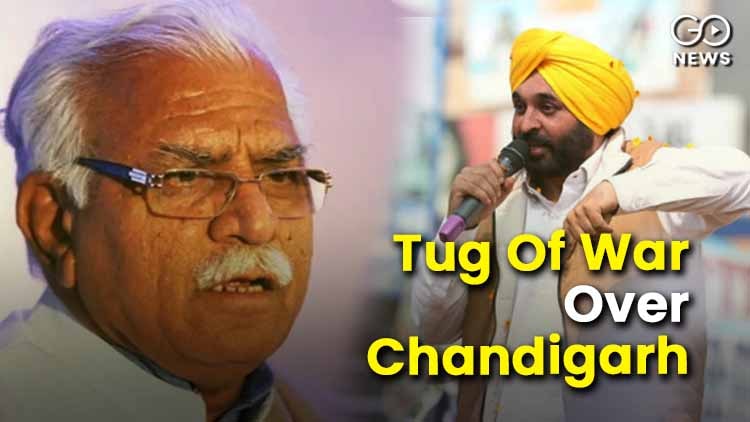 The Union Territory of Chandigarh has sparked a new round of debate. Punjab's Aam Aadmi Party administration, led by Bhagwant Mann, has also approved a motion in the state legislature seeking Chandigarh's transfer. Now, Haryana Chief Minister Manohar Lal Khattar has presented a resolution in the state legislature on the Chandigarh issue, urging the federal government to refrain from taking any action until all reservations about the Punjab Reorganization Act are resolved. Along with this, ML Khattar has addressed the topic of the Sutlej-Yamuna Link Canal once more.
Also Read:
IPL 2022: Highlights| Lucknow Super Giants(LSG) Beat Sunrisers Hyderabad(SRH) By 12 Runs

Chandigarh is a union territory that also serves as the joint capital of Punjab and Haryana. The Haryana government's resolution in the state assembly, which was passed by the Punjab assembly on April 1, 2022, has sparked controversy. CM Bhagwant Mann further accused the central government of disrupting the balance between administration and other common assets in the assembly. The Haryana government also expressed its displeasure with the Central Government's amendment to the rules of the Bhakra Beas Management Board, claiming that this decision goes against the spirit of the Punjab Reorganization Act, 1966, which makes river projects common property of Punjab and Haryana. Since Punjab and Haryana were separated, there has been a disagreement between the two states. For a long period, the Congress government ruled both states. When we consider the scenario, we can see that despite having a Congress-led administration in Punjab and a BJP-led government in Haryana, the problem has not been fixed. It is thought that no efforts were done in the direction of settling the situation due to the competing interests of both sides. Congress Dilemma! In Punjab, for example, the BJP has nothing to lose, and both of its MLAs walked out of the assembly to protest the idea; but, in Haryana, there is a party government, and in such a position, the Aam Aadmi Party has opted to settle the problem. A dispute can be observed in the form. On the other hand, the Congress party has found itself in a dilemma in both states, since its MLAs have sided with the interests of their respective states. At the same time, the Akali Dal, which does not have a foothold in Haryana, backed the plan to move Chandigarh to Punjab. With the Aam Aadmi Party assuming the government in Punjab with a landslide victory - despite the fact that the party has no political experience in either state - CM Bhagwant Mann is working to find a solution to the problem. But the odd thing is that both states have several similar difficulties, which their administrations are neglecting as they move toward mutual confrontation. Major Issues Ignored! CM Bhagwant Mann has revived the thorny topic of Chandigarh after decades, yet agriculture has been the state's greatest challenge. Farmers recently staged a large-scale demonstration in Mohali, where they renewed their demand for a legal guarantee of MSP. After becoming CM, Bhagwant Mann's government has neither introduced a motion in the assembly nor talked to the Center about this subject (till the writing of the report). Apart from the farmers, the Mann administration has made no real actions on the topic of agriculture, such as lowering the cost of agriculture owing to a shortage of natural resources, lower than projected pricing for agricultural goods, and climate change. In the assembly, no resolution on the important issues of the day has been offered or passed. To bring the farmers out of difficulty, the state sorely needs a practical and feasible agriculture strategy. Despite the fact that the government has made no mention of it and has taken no action in this direction. There is a need to make policies in the state of Punjab to address the agricultural lands that are becoming barren and less fertile. How to save farmers from the climatic disaster, how to engage rural youth with agriculture, and how to promote organic farming - the government must take immediate action in this area to benefit the state's economy, residents, and farmers to enhance here life.