Less Than 20% Adults Fully Vaccinated In Most Populated States 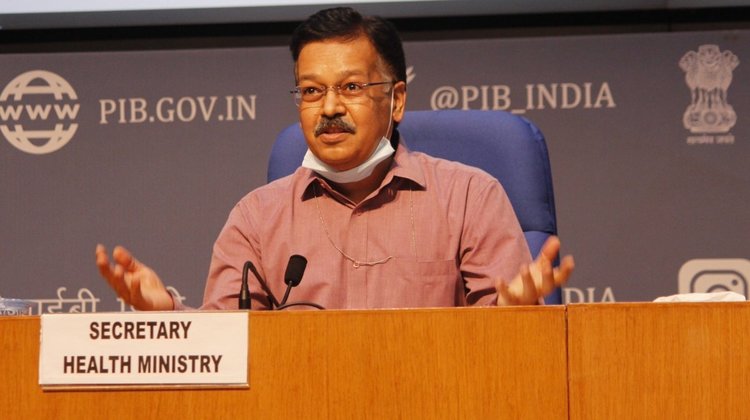 In his recently concluded press briefing, Union Health Secretary Rajesh Bhushan said that “we are still in the midst of the second surge of COVID-19 in the country”. He urged caution, especially with regard to festivals that are round the corner in the coming months of September and October. He said that a spike in cases is always observed during such times, and appealed to the public to celebrate within the guidelines for safety against the virus. The Indian-origin Delta variant of the coronavirus has extracted a lot of costs from the world in terms of human health, lives, and economic activity. The government has stated that it is targeting vaccination for all Indians by the end of 2021. However, various sources have expressed scepticism about the likelihood of meeting this target.
Also Read:
US Secretary Of State Briefs Media On Afghanistan Crisis

As expert warn of the impending “third-wave”, let us look at the state of the Corona vaccination drive in the 10 most populous Indian states.   Today’s briefing shows that the average doses, in Lakh doses/day, have increased steadily from January this year (2021) to August, the present month. 2.35 lakh daily doses were administered on an average in January, which went up to 52.16 lakh/day in August. Kerala continues to be the only state in the country with active cases at more than 1 lakh (1.7 lakh), contributing 51.19% of the total active cases nationwide. At present, only about 15% of adults in the country are fully vaccinated. While the much-touted “World’s Largest Vaccine Drive” may have reached the 60 crore vaccinations mark, there is still a long way to go before India is reasonably safe from the looming third wave of the coronavirus pandemic.  Experts have warned that it could hit India by August end. The Indian-origin Delta variant is now spreading around the world. In such a scenario, let us look at the state of COVID-19 vaccinations in the top 10 most populated states in the country. 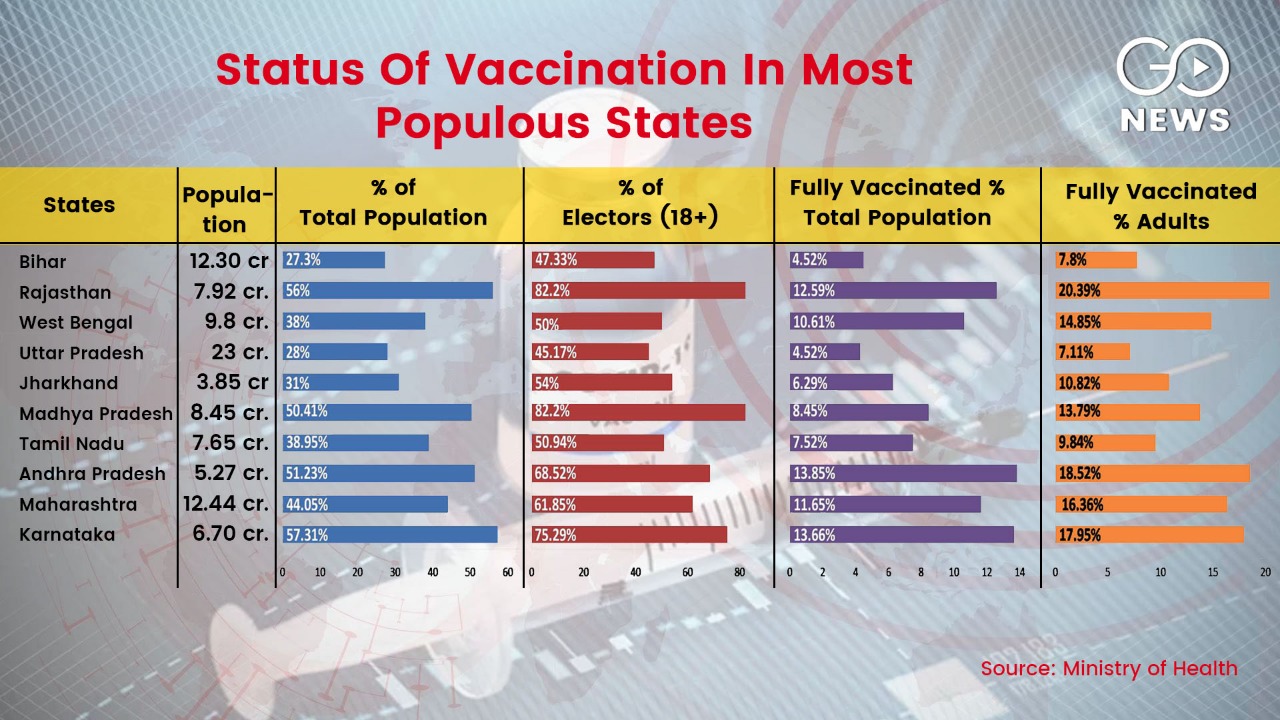 Uttar Pradesh is the most populous state in the country, where 3.37 crore vaccines have been administered as yet to a total population of 23 crore. That means 28% of the state’s total population has received at least one dose of the vaccine. Also, 1.04 crore second doses were given in the state, meaning that just 4.52% of the state’s population has received full inoculation. Among the state’s adults (aged 18 and above), 45.17% have received at least one dose and 7.11% are fully vaccinated. Bihar is the state where the least percentage of the population, and adults, have received inoculation (both first and second doses). 27.3% of its total population has been covered by at least one dose of the corona vaccine, and just 4.52% is fully vaccinated. 47.33% of Bihar’s adults got at least one dose, and only 7.8% of its adults have gotten the second jab of the vaccine. Of the states that have fared relatively better among India’s ten most populated, Maharashtra with the second largest population by state has an overall coverage of 44.05%. 11.65% of the population is double vaccinated. 61.85% of its adults received at least one dose, and 16.36% of its adults were double vaccinated. The table shows that Rajasthan, Andhra Pradesh, and Karnataka have emerged as the top3 among the ten most populous states of the country. COVID-19 continues to be a real threat in India. There were 46,164 new cases reported on August 25, and the weekly average has hovered between 30-40,000 cases since July, in a major climbdown since the devastating surge between March to June this year. 607 people died yesterday of the disease, and the official death count is 4.36 lakh, a figure that has been hotly contested by diverse civil society, media, and political sources. These dense population centres of India are also the ones with lack of education, basic or advanced healthcare facilities, unsanitary conditions, among other issues. As a whole, the country has been facing production and supply troubles with the vaccinations often running in short supply. The slot booking through the COWIN app is often opaque, difficult, and time-consuming to people who are not proficient with English, mobile devices, the internet, and technology. With the lack of adequate preparation on all fronts (setting up oxygen plants, increasing hospitals and their capacity, facilitating quarantines and lockdowns without economic disruption, educating, empowering, and overcoming vaccine hesitancy, incentivizing frontline healthcare workers, including the marginalized sections for effective vaccine planning, and much more), similar or worse scenes than what transpired a few months ago could return. The deaths and illnesses caused by the virus take not only an economic and emotional toll but also shake the confidence of the public in established institutions and political systems. Black marketing, hoarding, price-gouging and other malpractices have their root cause in the rapid rate of infections and lack of infrastructure to navigate the crisis properly. While appreciating India’s progress thus far, we should remain critical and push the authorities to ramp up their efforts on a war footing.