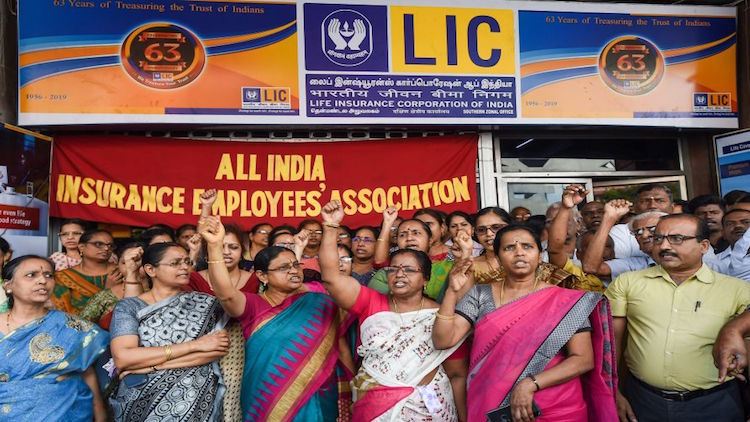 Nationwide protests have begun after the announcement by the government that it will sell its share in the Life Insurance Corporation (LIC) of India.  Expressing displeasure with this decision of the government and on an appeal by the All India Insurance Employees’ Association (AIIEA), insurance employees have stopped work and demanded that the government revoke its decision.  Also Read: Kerala Declares Coronavirus State Calamity After Three Positive Cases

The AIIEA said that the LIC comes forward as the last recourse of assistance whenever funds are needed for other public sector companies.  It said further that this decision of the Central government is against the people of India because LIC’s advancement is the clear result of the trust and dedication of insurance holders and agents. Nirmala Sitharaman, Finance Minister, had made the announcement to sell the government’s share in LIC during the Budget speech on Saturday. It is not yet clear how much of its share in LIC the government plans to sell.  However, associations of insurance employees have already begun opposing this decision. Insurance employees have taken to the streets across the country, from Maharashtra to Karnataka and the up to the north-eastern state of Tripura. Protesters say that LIC has made a significant contribution towards nation-building and the government should annul its decision. The AIIEA has issued the warning that insurance holders’ faith in LIC will be shaken if there is any kind of meddling with the government’s share in the company. This 60-year-old company had begun its journey with a capital base of Rs 5 crore and now, it occupies more than 70% of the insurance market. The insurance employees’ association is apprehensive that with the sale of more than 50% share, the status of a ‘public sector undertaking’ will be snatched away from LIC. Meanwhile, P Chidambaram, former Finance Minister, has said that if the government plans to garner funds by selling its share in LIC and that’s why it is being divested, then it’s a bad rationale.