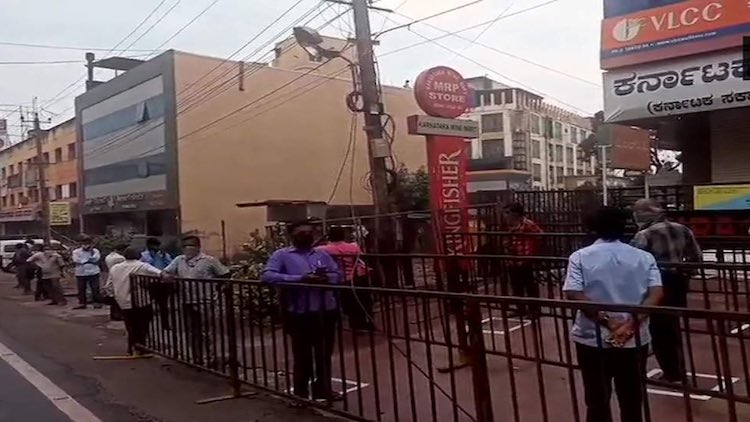 The third phase of the lockdown has begun with several kinds of concessions. Liquor shops were opened after 40 days in Green Zones of several states, where long queues were seen right from early morning.  All 11 districts of Delhi are in the Red Zone but concessions have been given here too. A crowd was seen outside a liquor shop in East Delhi’s Laxmi Nagar. Also Read: India COVID-19 Cases Cross 42,000, Death Toll At 1,373

Liquor shops have been ordered to remain open between 9 a.m. and 7 p.m. in Karnataka’s Bengaluru. People arrived at liquor shops in Karnataka’s Hubli early in the morning. The Chhattisgarh government has decided to open liquor shops in all areas apart from Containment Zones. In capital Raipur, people were seen standing outside liquor shops in large numbers. Maharashtra is among the states worst-affected by the coronavirus and over here, the state government has decided to open liquor shops in Red Zones. However, Aurangabad MP Imtiaz Jaleel has warned that if liquor shops are opened in Red Zones, he will get them closed by violating restrictions. He said that he will make women take to the streets because in this hour of crisis, the problems faced by women will increase if liquor is sold. V Narayansamy, Chief Minister of Congress-ruled Puducherry, has ordered the opening of all kinds of factories, shops and restaurants. He has warned that action will be taken if social distancing norms are not followed. However, no decision has been taken on opening liquor shops in Puducherry. Other than liquor shops, salons have also opened in some states. In Andhra Pradesh’s Vijayawada, social distancing norms are being followed around salons. Goa has become coronavirus-free and hair salons have been opened in Panaji as well. Watch the video story here:
TAGS wine shop alcohol COVID-19 pandemic COVID-19 Delhi COVID-19 COVID-19 pandemic coronavirus pandemic Coronavirus in India coronavirus Liquor Shops Lockdown 3.0