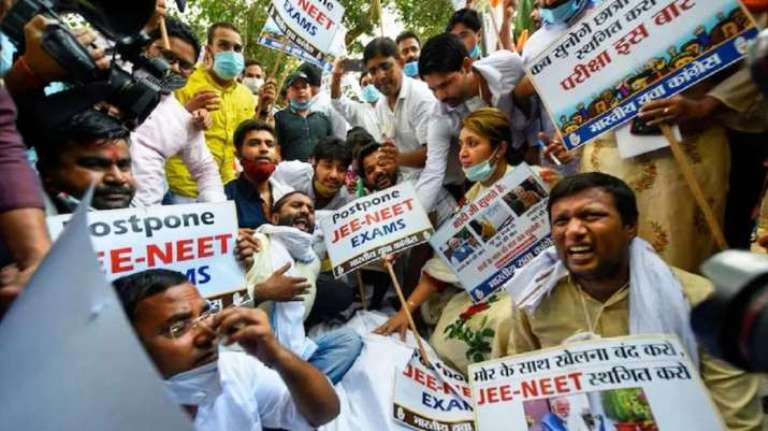 The Samajwadi Party workers, who have been continuously protesting against the Centre's decision to conduct JEE and NEET exams, have been lathi-charged by the UP police on Monday. During the lathi-charge, many activists got their heads torn, few suffered deep injuries on their arms, legs, and shoulders. After the action, the Lucknow police have detained at least 50 Samajwadi Party workers.

Samajwadi Party President Akhilesh Yadav in a tweet called it a 'bloody attack' not a lathi-charge against SP workers who took to the streets in protest against the exams during the coronary period. 'Today every family with children is worried,' Yadav further said.

In another tweet, Akhilesh Yadav wrote that 'the manner in which the aspirants from all over the country have expressed their objection by showing their 'displeasure', it has made it clear that the concerned youth and parents also want the ruling parties to give up their pride and listen to the demands of the family.'

Earlier on Friday, Samajwadi Party workers staged a sit-in protest against the cancellation of JEE-NEET exams at Raj Bhawan, even then the police lathi-charged the SP workers. However, despite such action, demonstrations are going on in many states including Lucknow. Many Chief Ministers are also openly opposing it. At the same time, the central government is adamant about holding the examination citing "students' future". The Ministry of Education claims that all the necessary preparations for the examination have been taken. The JEE examination starts from September 1, while the NEET exam will be conducted on September 13. Millions of students from across the country will take part in the engineering and medical entrance exams.
TAGS Akhilesh Yadav Uttar Pradesh Police Uttar Pradesh NEET-JEE exam Samajwadi Party Lucknow