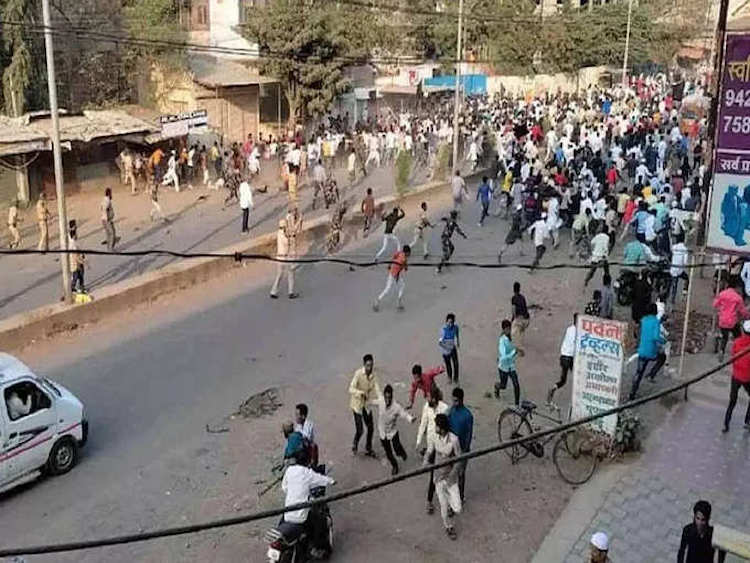 After Friday’s bandh (shutdown) in Mahrashtra over anti-Muslim violence in Tripura, the BJP called its own bandh in Amrvati district of Maharashtra today on 13th November, due to which there was a large turnout on the streets with saffron flags, posters, and sloganeering. This bandh called by the BJP took an ugly and violent turn and incidents of stone pelting and property damage emerged from the scene. Earlier, some Muslim organizations had called for a bandh on Froday to protests aginst the violence in Tripura which is said to be targeted against the minority community, during which there were some reports of stone-pelting in Nanded, Amravati, and Malegaon in Nasik.
Also Read:
What Does The Pentagon Say About China-India Conflicts?

An official has said that during the bandh organized by saffron groups, there were reports of stone pelting by crowds in different areas of Amravati and also the destruction of shops which stayed open, following which police had to resort to lathicharge (baton charge) to control the crowd. Situated 670 km. from the state capital Mumbai, Maharashtra’s eastern town of Amravati saw significant crowds on the streets at Rajkamal chowk bearing saffron flags and chanting slogans. According to media reports, a police officer said that members of the crowd destroyed shops in Rajkamal chowk and other areas. The Hindu says that after lathi-charge to disperse the crowd, additional police force was deployed in the affected areas to maintain security and order. Friday Violence In Amrvati, 11 FIRs, 10 Arrests According to local police around 8,000 people gathered in front of the Amravati District Collector’s office to submit a memorandum relating to the violence in Tripura, which is being widely reported as exclusively anti-Muslim. The memorandum demanded immediate cessation of such attacks. The officers said further that as the people were returning after submitting the memorandum, there was stone-pelting on them at three locations between Chitra Chowk and Cotton Bazaar, which falls under the Kotwali police station. Acting on the incident, the Kotwalipolice has registered 11 FIRs under various sections including rioting, and 10 arrests have also been made. The officialsaid that “toprevent any untoward incident, two companies of the State Reserve Police Force (SRPF) along with further reinforcements are being stationed at the situation is normal now.” (as of the time of writing this report) Violence In Malegaon, Nasik: 3 FIRs, 10 Arrests Malegaon city in the Nasik district has been a communally harmonious place. Damage to police cars and injuries to at least 10 police personnel and 3 officials were reported after the events of Friday which included a police lathi charge to disperse the crowd. Incidents of stone pelting were reported from  Sahara Hospital and New bus Stand areas, according to local news outlet The News. The outlet quotes a local police offer to say that 3 FIRs and 10 arrests have been made. The police is also scanning CCTV footage to determine the identities of others involved in the crime. Violence In Nanded, Marathwada: 3 FIRs, 4 Arrested Local media in Nanded says that 8 police officers have been injured due to stone pelting. It also said that crowds ransacked and vandalized four cars as well. 3 FIRs have been lodged against unknown people and 4 people have been arrested. It is reported in local media that 2 FIRs have been filed in Vashmi area and 1 in Yavatmal for the violence. The situation is normal now. Local Politicians Squarely Blame BJP For The Violence Shiv Sena MP Sanjay Raut and Minister Abdul Sattar, Ashok Chavhan of Congress, Nawab Malik of NCP, and AIMIM MP Syed Imtiyaz Jaleel blamed the violence of Saturday’s bandh on the BJP. Opposition leader and former CM from BJP, Devendra Fadnavis, also appealed to the state government to maintain law and order and condemned the violence in the three cities. Bandh Announced Against Tripura Violence Raza Academy, a Muslim organization based out of Mumbra in Mumbai, had called for the bandh and stressed that it should be a peaceful one, saying that no shop should be forced to close. The bandh was organized to protest against systematic violence against Muslims in Tripura. Bhindi bazaar, Mohammad Ali Jinnah road, Kurla, along with Mumbra and Bhiwandi and other Muslim-dominated areas in Thane observed a complete shutdown. Police say that there were no complaints of violence or any other untoward incidents from either Mumbra or Bhiwandi on Friday. Raza academy had submitted a memorandum to Maharashtra Governor Bhagat Singh Koshyari which demanded that the violence-affected people in Tripura should be compensated and any mosques that had been destroyed should be rebuilt.