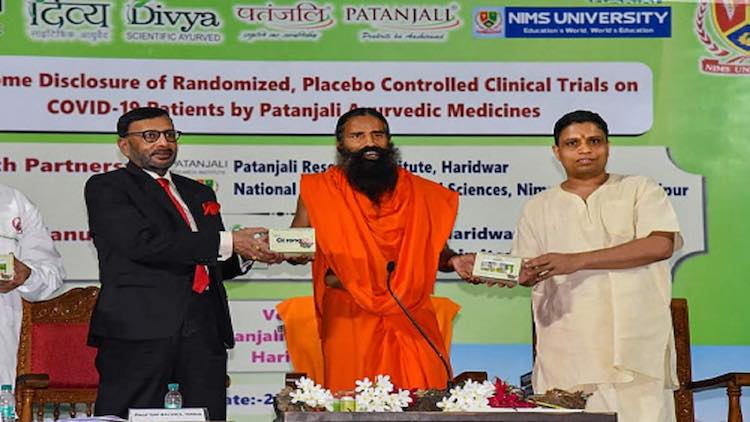 State Home Minister Anil Deshmukh in a strong warning to Baba Ramdev said that Maharashtra won’t allow the sale of “spurious medicines”. He tweeted, “The National Institute of Medical Sciences, Jaipur will find out whether clinical trials of Patanjali Ayurveda drug Coronil were done at all?

The National Institute of Medical Sciences, Jaipur will find out whether clinical trials of @PypAyurved's 'Coronil' were done at all. An abundant warning to @yogrishiramdev that Maharashtra won't allow sale of spurious medicines. #MaharashtraGovtCares#NoPlayingWithLives

Deshmukh also said that if an attempt was made to sell or promote Coronil, strict legal action would be taken against Patanjali as it has not been approved by the Ministry of AYUSH yet.

Maharashtra govt will take legal action against Patanjali if they try to advertise or sell their anti-Corona drug as AYUSH Ministry is yet to approve the medicine: Anil Deshmukh, Maharashtra Home Minister (File pic) pic.twitter.com/bYTHnYD0Q6

Maharashtra Deputy Chief Minister Ajit Pawar also took a dig at Patanjali's Coronil medicine that anyone who believes in Ramdev and Patanjali should take this medicine. Before Maharashtra, the Rajasthan government had banned Coronil medicine. The state government had said in its order that without the approval of the Ministry of AYUSH, no Ayurvedic medicine can be sold for any medicine related to COVID-19. The Uttarakhand Ayurveda Department is all set to issue a notice to Patanjali. The Ayurveda department says that Patanjali was issued a license for cold, cough medicine but not for Coronavirus. The AYUSH Ministry has put a ban on advertising/publicising the ‘Corona kit’ until the whole matter gets probed.