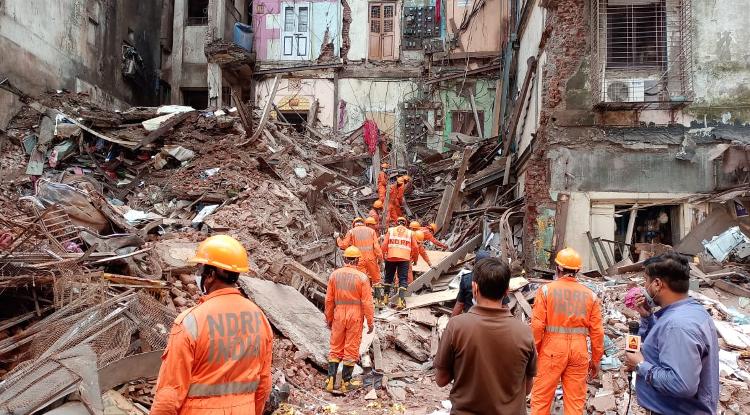 Due to constant heavy rains in Mumbai, two buildings collapsed in two different areas in which at least eight people have died. The first accident occurred in the Fort area of South Mumbai where a part of a five-storey residential building collapsed. At least 6 people have died in the accident and many people have been taken out of debris and taken to hospital. So far, 23 people have been safely evacuated from the debris.

According to the NDRF, the accident took place in a five-storey Bhanushali apartments in the Fort area of South Mumbai. So far 24 people have been rescued, while a campaign is being conducted in search of the stranded people. According to BMC officials, this building was already in a very dangerous category and it was also repaired a few days ago.

Similarly, a three-storey chawl collapsed in Malwani in Malad suburb of West Mumbai. According to officials, two people were killed when a part of the three-storey old building collapsed, while the other five injured trapped in the rubble have been rescued. On Thursday night, Maharashtra Chief Minister Uddhav Thackeray visited the spot. Before them, Housing Minister Jitendra Awhad, Mumbai Mayor Kishori Pednekar, and local MP Arvind Sawant also reached the spot.

Since the last week, there has been continuous rain in Mumbai. The Colaba Weather Centre in South Mumbai recorded 121.6 mm of rainfall. According to the Santacruz Meteorological Center, Mumbai’s western suburb, it recorded 96.6 mm of rainfall during this period. Apart from this, 35.2 mm rainfall was recorded in Thane-Belapur. At the same time, the Meteorological Department has issued an alert for rain in Mumbai and surrounding areas for the next four days as well.