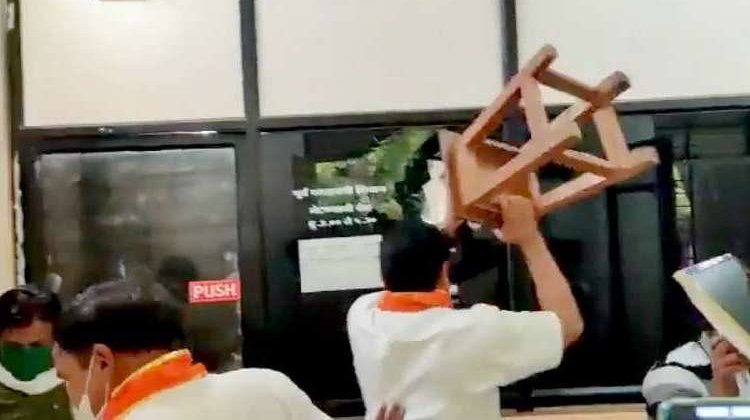 Maharashtra Navnirman Sena (MNS) workers vandalised a government property in Latur district after they went to submit an application that certain seeds distributed among farmers by the department allegedly failed to germinate. MNS workers entered into the office of the co-director of Agriculture Department and broke glass and computers.
Also Read:
Reported Press Freedom Violations in Black Lives Matter Protests Now Near 500

The video has gone viral in which MNS workers are seen vandalising chairs and stools, along with shouting slogans. Latur police have registered a case against this hooliganism of MNS workers and preparations are being made to initiate legal action.

Some seeds did not germinate. So some MNS workers had come to Agriculture Dept office to submit a request regarding. They raised slogans during which some workers vandalised the office.Complaint has been registered,legal action will be taken: Sanjay Pawar,Asst Inspector of Police pic.twitter.com/aEDY5bPk6O

According to Sanjay Pawar, Assistant Inspector of Police, "Some seeds did not germinate. So some MNS workers had come to the Agriculture Department office to submit a request regarding an inquiry into it," said Sanjay Pawar, Assistant Inspector of Police. The police stated that a complaint was registered and action will be taken swiftly against the miscreants. The Maharashtra Navnirman Sena, a political party formed in 2006 under the leadership of Raj Thackeray, is notorious for such antics. Earlier, workers of this party have targeted North Indian street hawkers in Maharashtra. Raising the issue of infiltration of Bangladesh, MNS activists have also harassed the people. This party won just one seat in the 2019 assembly elections.