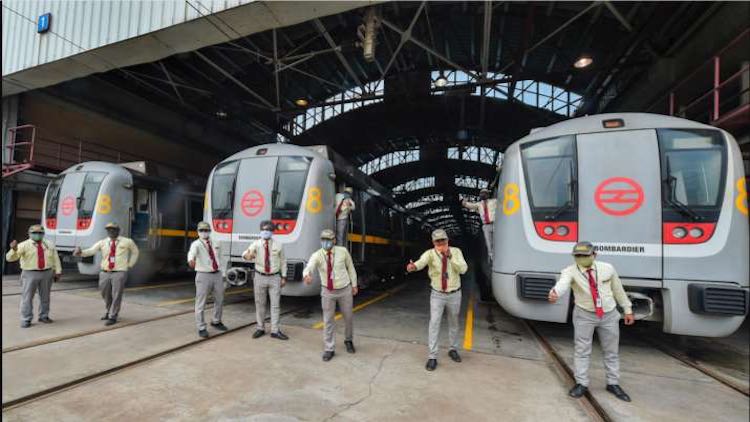 The Metro services, which were suspended due to the Coronavirus pandemic, resumed on Monday after five months. The commencement of the metro service has brought great relief to those commuters who used to ride it every day to go to the office. Many travellers said that the introduction of Metro service will save time as well as money. AK Garg, Director Operations, Delhi Metro Rail Corporation, said I travelled from Malviya Nagar to Rajiv Chowk, today. I am happy to see that the passengers are confident about travelling in Delhi Metro. We have made all arrangements to make travel safe for the commuters, he added.
Also Read:
Good News On Economic Front: Agricultural Exports Recover To Pre-COVID Level

Metro service has been started in Delhi from 7 am to 11 pm and from 4 to 8 pm. Although not many people were seen in the metro on the first day.

We are on our way. It's been 169 days since we've seen you! Travel responsibly and commute if it's only necessary. #MetroBackOnTrack pic.twitter.com/aCUnYO1ptS

Before starting the metro service, various security arrangements have been made. Joint Commissioner of Delhi Traffic Police Atul Katiyar said police personnel have been deployed at every metro station for crowd management and to ensure that people wear face masks and follow norms of social distancing. Delhi Metro has installed sanitiser outside every station and thermal screening is being done before entry. At present, the use of tokens is completely banned and only passengers using the metro card are allowed to travel. A passenger present on the Huda City Center Metro said that he is very happy with the resumption of Metro services.

Apart from DMRC, services have also started on Noida Metro's Aqua line. One passenger said that because of the closure of the metro, he had to take cabs, which increased his travel expenses considerably.

A passenger says, "I had to avail cab services which increased my travel cost. With metro services starting, I can save on my travel expenses. People need to stricly follow social distancing" pic.twitter.com/A0R3kFwZSq