Migrant Worker Dies Midway Cycling From Maharashtra To UP 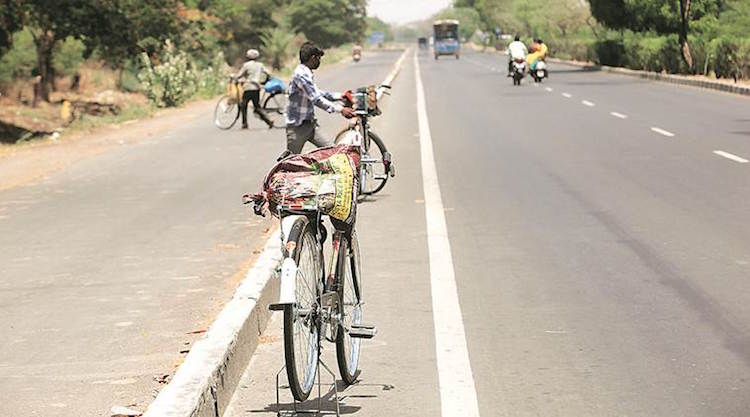 The incidence of the deaths of migrant labourers trying to reach their homes during the lockdown continues unabated. Now, a labourer who left Maharashtra’s Bhiwandi on cycle for Uttar Pradesh’s Maharajganj district has died. The deceased has been identified as Tabrak Ansari, who had started out from Bhiwandi along with 10 other labourers two days ago. After covering a distance of around 350 kms, he collapsed on reaching Madhya Pradesh’s Barwani district.  Also Read: COVID-19 Cases Cross 37,300, Death Toll 1,218

Barwani SDM G Dhangar said, “He was found in an unconscious state and was taken to a hospital. He passed away during treatment. A post-mortem report is awaited.” According to Ramesh Kumar, a companion of Tabrak Ansari and a fellow labourer, all of them used to work at a power-loom unit in Bhiwandi but after work stopped, they had no other option but to return home.  Before this, several other labourers have also died while returning home from metropolitan cities, but their migration continues. After around 38 days of the lockdown, state governments have started making attempts to ferry migrant labourers back to their homes in Shramik Special Trains. Three hundred and forty seven labourers from Madhya Pradesh have arrived at Misrod railway station (near Bhopal) from Nashik, Maharashtra. They belong to 28 different districts of the state. According to SDM Bhopal, all the labourers have been declared fit after a health screening and are being sent to their respective districts. Meanwhile, Bihar Deputy Chief Minister Sushil Kumar Modi has said that block headquarters in the state have been made quarantine centres. Migrant labourers returning home on trains will be placed under quarantine here. During this period, they will be given utensils, bathing essentials and ‘gamcha’ (towel/scarf). According to Chhattisgarh Nodal Officer Sonmani Borah, information on the return of 1 lakh 9 thousand migrant labourers has been received so far. Among them, a majority will return but labourers from the state are working in other places in large numbers. The state government is engaged in making an assessment of this. Watch the video story here:
TAGS coronavirus lockdown coronavirus pandemic coronavirus COVID-19 pandemic COVID-19 Barwani Bhiwandi nationwide lockdown Lockdown cycling migrant workers Uttar Pradesh Maharashtra