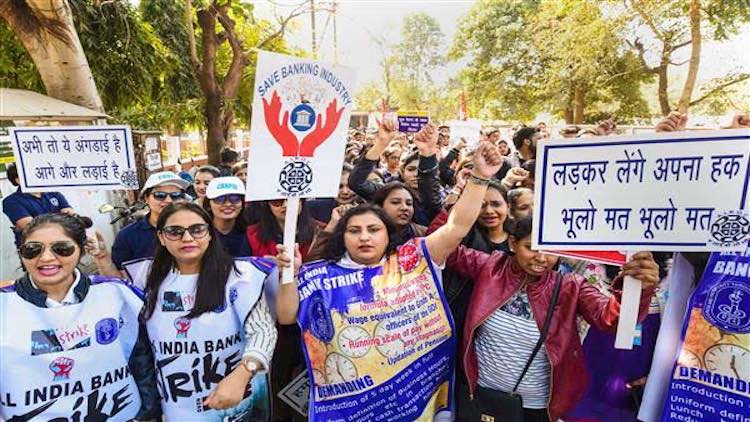 Banking services in the country have ground to a halt due to the strike called by the United Forum of Bank Unions, in which more than 10 lakh bank employees are participating, asking for a salary hike, apart from other demands. On the first day of the strike, 31 lakh cheques worth Rs 23,000 crore could not be cleared. Customers were inconvenienced while trying to deposit and withdraw cash and work related to the release of loan amount also came to a standstill. Also Read: Stage Set For Sunday's Ind Vs NZ 5th T20 At Bay Oval

The impact of this strike is being felt in public sector banks across the country. Bank employees are out on the roads, pressing for their demands, in Bengaluru, Hubli, Kalaburgi, Ludhiana, Ambala, Moradabad, Kolkata and Agartala. The protesters have warned that if their demands are not met, the entire banking system will be obstructed from April 1. They are demanding a minimum 20% increase in salary and protection from the impact of NPAs of corporate companies.  Apart from salary hike, bank employees have several other demands and they are not ready to retreat until those demands are met. Nine unions are part of this strike called by the United Forum of Bank Unions, including All India Bank Officers’ Confederation, All India Bank Employees’ Association and National Organisation of Bank Workers. These organisations have made it clear that if there is no decision on their demands, then strike will be called again on March 11, 12 and 13 and all bank employees will go on an indefinite strike from April 1.
TAGS National Organisation of Bank Officers All India Bank Officer's Association All India Bank Officer's Confederation Bank Employees United Forum of Bank Unions Bank strike Bank