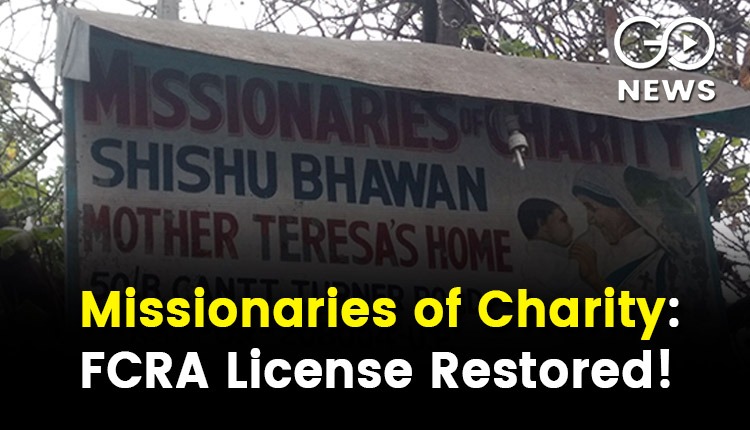 The charity institution Missionaries of Charity which was founded by Nobel Peace Prize Awardee Mother Teresa in Kolkata has come under intense pressure from the Centre in recent times, with its FCRA [Foreign Contribution (Regulation) Act, 2010] license being revoked on December 25th on the basis of “adverse inputs” received by the Ministry of Home Affairs (MHA).

The FCRA registration for Mother Teresa’s Missionaries of Charity is back. (Screenshot????) The ‘adverse inputs’ harassed so many and then disappeared in two weeks.

The POWER OF LOVE is stronger than the power of 56 inch. pic.twitter.com/TQmMKRTe7N

This move was widely criticized by many, including West Bengal Chief Minister Mamata Banerjee. Missionaries of Charity (MOC) called this a “cruel Christmas gift to the poor”. Odisha Chief Minister Naveen Patnaik’s government came forward with assistance of ₹78.76 lakh to the charity’s 13 institutions operational in the state through the Chief Minister Relief Fund.

Shocked to hear that on Christmas, Union Ministry FROZE ALL BANK ACCOUNTS of Mother Teresa’s Missionaries of Charity in India!

Their 22,000 patients & employees have been left without food & medicines.

While the law is paramount, humanitarian efforts must not be compromised.

The MHA denied reports that it had frozen the bank accounts of the charity and claimed that the MOC itself asked SBI (State Bank of India) to freeze its accounts. CM Patnaik had said that the move is to ensure “no one in these organizations should suffer”. The MOC runs 13 institutions for orphans and lepers throughout the state.

Odisha Chief Minister Naveen Patnaik has sanctioned Rs 78.76 lakh from the CMRF to support 13 institutions run by Missionaries of Charity in the state: CMO, Odisha

An entry in the Foreign Contribution (Regulation) Act shows that the license of the organization has been restored today, meaning that it can resume receiving funds from abroad. News agency ANI has reported that the license was restored after submitting “necessary documents to the concerned department”. MOC Nuns Evicted From Kanpur Cantonment Land Yesterday, former Union Minister Jayaram Ramesh tweeted a report that said that nuns at Nirmala Shishu Bhawan, an orphanage run by the Missionaries of Charity in Kanpur for abandoned and destitute children, had been evicted. The orphanage was operational on Army land since 1968 in Kanpur cantonment and its lease expired in 2019. According to a web portal ucanews.com, Chottebhai, a convenor of the Indian Catholic Forum and a close associate of the orphanage said: “It is unfortunate that an institution that served the abandoned and voiceless in the society is shut down instead of the land lease being extended”. READ: How Foreign Media Reported On The Recent Anti-Christian Attacks In India The Indian Catholic Forum questioned the DEO for demanding “₹1 crore” from the nuns while terming them ‘trespassers’. Its statement said: “The citizens of Kanpur were outraged at this eviction and takeover, but remained mute spectators as the sisters had already decided to surrender the property, probably in the hope that by doing so the existing demand of [the fine] would be waived” “It certainly doesn’t paint the army or DEO in a good light. Did it deliberately choose a soft target knowing that it did not have the stomach for a fight? This selective targeting also seems to have the malodor of a communal bias. Is this how the nation repays the true desh bhakts, those who serve the neediest of society without expecting anything in return? It is shameful” Orphanage Eviction Attempt Stopped By Madhya Pradesh High Court Father Sinto Varghese, director of St. Francis Sevadham Orphanage in Shyampur said that on January 6th, police and administrative officials to the orphanage and began immediately forcing them to evict it. The allegation was that children were being fed beef there and converted to Christianity. “It was a terrible situation, No one can ever imagine,” said Father Sinto Varghese, director of St. Francis Sevadham Orphanage in Shyampur in Sagar Diocese. “A contingent of government officials accompanied by police equipped with riot and emergency vehicles came around 1pm on January 6 and began forcing our children to accompany them.” READ: 2021 'Most Violent Year' For Christians In India, UCF Documents Rising Hate Crimes The High Court in Jabalpur, Madhya Pradesh said: “there is nothing on record as to under what circumstances and what provision the children are being shifted from the orphanage to some other place.” The court also questioned the availability of space at the proposed new location and also why they had to be shifted during the prevailing cold winter and rising COVID-19 cases, including the Omicron variant. The lawyer representing St. Francis Sevadham Orphanage in court countered the government’s lawyer who held that the license of the establishment had expired in 2020, saying that it had reapplied but the government was not processing it.