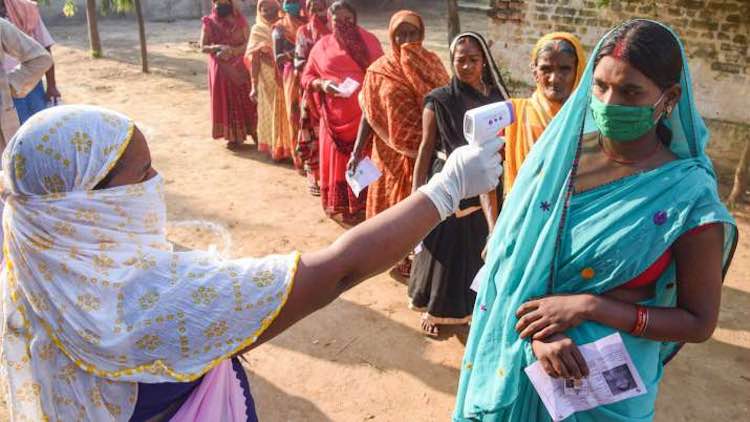 Amid the Coronavirus pandemic, voting for the first phase of Bihar Assembly elections has ended at 6 pm on Wednesday. Out of the total 243 seats in Bihar, the first phase of voting for 71 assembly seats in 16 districts are now over. A moderate voter turnout of 53.46% was recorded till 6 pm. The balloting was peaceful as no incident of violence was reported.
Also Read:
Centre May Raise Tax On Petrol-Diesel To Deal With Economic Crisis

All eyes are on Bihar polls, the first election during the COVID-19 pandemic in which over 2.14 crore voters will decide the fate of 1,066 candidates. In this phase, the credibility of RJD is at stake, because last time out of 71 seats, RJD won 25, JDU won 21 seats while BJP got 14 seats. The Congress had won 8, HAM, CPM and Independents one seat each while the LJP did not win even single seat. A total of 1,066 candidates are in the fray for 71 seats in the first phase, of which 375 candidates are millionaires, i.e., every third candidate is a millionaire. Out of these, RJD has 39 of the 41 candidates who have assets worth more than Rs 1 crore. RJD’s Anant Singh from Mokjma constituency is the richest candidate with assets of more than Rs 68 crore. In the first phase, the fate of 7 ministers of the NDA government led by Nitish Kumar is to be decided. Of these, four are from JDU quota and three are from BJP quota. Ministers from JDU quota include Shailesh Kumar from Jamalpur, Krishnanandan Verma from Ghosi, Santosh Kumar Nirala from Rajpur and Jai Kumar Singh from Dinara. At the same time, among the BJP quota ministers, Ram Narayan Mandal from Banka, Brij Kishore Bind from Chainpur, and Prem Kumar from Gaya are in the fray. Polling are also being held in the first phase of Kahalgaon, seat of Congress Legislature Party leader Sadanand Singh. Yadav MLAs are contesting 22 of the 71 seats of the first phase. In the 2015 elections, most Yadav MLAs were successful in winning. Out of 71 seats, 22 Yadavs won while seven MLAs from Rajput, Bhumihar and Kushwaha communities won. Besides, three seats are occupied by the MLAs of Kurmi community, while the SC-ST community MLA had won 13 reserved seats.