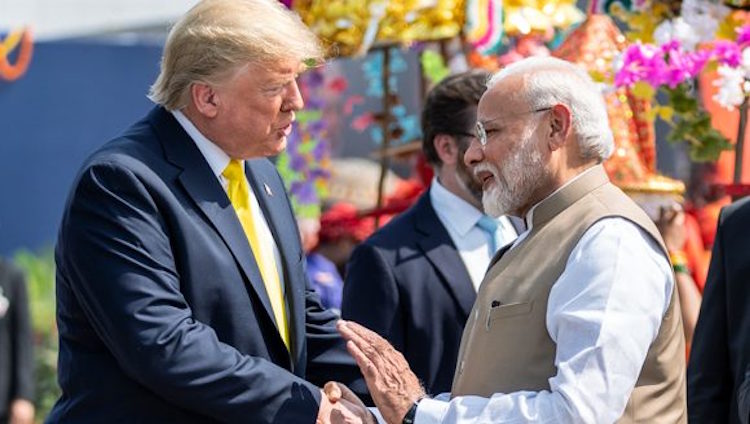 Having promised stronger India-US strategic ties, PM Modi and US President Donald Trump held extensive talks on Tuesday and have agreed to "promptly conclude" the ongoing trade negotiations, which they hope can become phase one of a comprehensive bilateral trade agreement, according to Modi-Trump joint statement. On Tuesday, India and the US signed a $3 billion defence deal comprising a $2.6 billion deal for the 24 MH-60R Seahawks helicopters from Sikorsky-Lockheed Martin and six AH-64E Apache helicopters for Indian Navy worth around $930 million. Also Read: Delhi Riots: 800 More Troops Deployed As Death Toll Rises To 20

After their deliberation at Delhi’s Hyderabad House, the two leaders issued a joint statement focusing on major agreements on Defence, homeland security, people to people ties, among other partnerships, however, the trade deal is still on the backburner, although Trump said he was optimistic but reiterated that any deal has to be fair and reciprocal for the United States. Excerpts from the full text: Comprehensive Global Strategic Partnership President Trump and Prime Minister Modi pledged to deepen defense and security cooperation, especially through greater maritime and space domain awareness and information sharing; joint cooperation; exchange of military liaison personnel; advanced training and expanded exercises between all services and special forces; closer collaboration on co-development and co-production of advanced defense components, equipment, and platforms; and partnership between their defense industries. Noting that a strong and capable Indian military supports peace, stability, and a rules-based order in the Indo-Pacific, and reaffirming his pledge to support the transfer to India of advanced U.S. military technology, President Trump welcomed India’s recent decision to procure MH-60R naval and AH-64E Apache helicopters. These capabilities will advance shared security interests, job growth, and industrial cooperation between both countries. As India works to acquire new defense capabilities, President Trump reaffirmed India’s status as a Major Defense Partner, affording it the highest consideration for procurement and technology transfer purposes. The leaders look forward to early conclusions of defense cooperation enabling agreements, including Basic Exchange and Cooperation Agreement. President Trump and Prime Minister Modi resolved to enhance security of their homelands through cooperation and to jointly fight international crimes like human trafficking, terrorism and violent extremism, drug-trafficking, and crimes in cyberspace. They welcomed the decision by the U.S. Department of Homeland Security and India’s Ministry of Home Affairs to reinvigorate the Homeland Security Dialogue. As a demonstration of their shared commitment to combating the threat that illicit drugs pose to their citizens, the leaders announced their intent to establish a new Counter-Narcotics Working Group between their respective law enforcement agencies.

Prime Minister Modi and President Trump recognized the increasing importance of the trade and investment dimension of the United States-India relationship, and the need for long-term trade stability that will benefit both the American and Indian economies. They agreed to promptly conclude the ongoing negotiations, which they hope can become phase one of a comprehensive bilateral trade agreement that reflects the true ambition and full potential of the bilateral commercial relations, advancing prosperity, investment, and job creation in both countries. Strategic Convergence in the Indo-Pacific The United States appreciates India’s role as a net provider of security, as well as developmental and humanitarian assistance in the Indian Ocean Region. India and the United States remain committed to sustainable, transparent, quality infrastructure development in the region. President Trump and Prime Minister Modi welcomed the U.S. International Development Finance Corporation (DFC) announcement of a $600 million financing facility for renewable energy projects in India and the DFC’s decision to establish a permanent presence in India this year. President Trump and Prime Minister Modi decided to strengthen consultation through United States-India-Japan trilateral summits; the 2+2 Ministerial meeting mechanism of the Foreign and Defense Ministers of India and the United States; and the United States-India-Australia-Japan Quadrilateral consultations, among others. President Trump and Prime Minister Modi looked forward to enhanced maritime domain awareness sharing among the United States, India, and other partners. Partnership for Global Leadership President Trump and Prime Minister Modi committed to working together to strengthen and reform the United Nations and other international organizations, and to ensure their integrity. President Trump reaffirmed the support of the United States for India’s permanent membership on a reformed UN Security Council. He also reaffirmed U.S. support for India’s entry into the Nuclear Suppliers Group without any delay. President Trump and Prime Minister Modi denounced any use of terrorist proxies and strongly condemned cross-border terrorism in all its forms. They call on Pakistan to ensure that no territory under its control is used to launch terrorist attacks, and to expeditiously bring to justice the perpetrators of such attacks, including 26/11Mumbai and Pathankot. They called for concerted action against all terrorist groups, including Al-Qa’ida, ISIS, Jaish-e-Mohammad, Lashkar-e-Tayyiba, Hizb-ul Mujahideen, the Haqqani Network, TTP, D-Company, and all their affiliates. The United States and India are committed to an open, reliable, and secure Internet that facilitates trade and communication. The United States and India recognize the need for an innovative digital ecosystem that is secure and reliable and that facilitates the flow of information and data.
TAGS homeland security defence deal Modi-Trump joint statement trade negotiations bilateral ties India-US india-us trade India Trump PM Modi