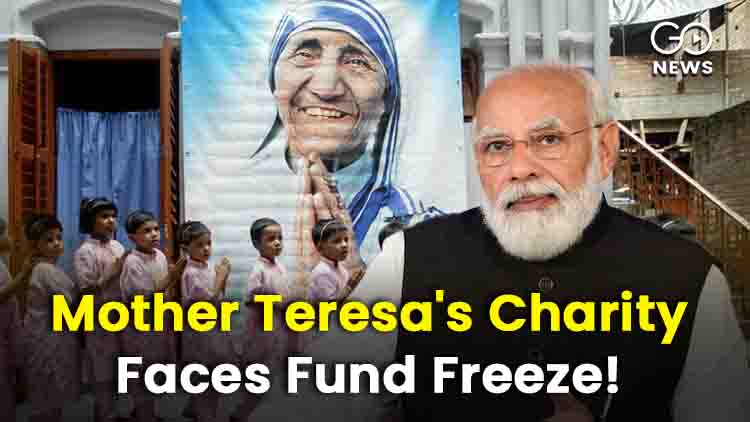 West Bengal Chief Minister Mamta Banerjee expressed shock at the reports stating that bank accounts operated by Mother Teresa's Missionaries of Charity organisation were frozen on December 25th i.e. Christmas Day. Trinamool Congress (TMC) leader, in a tweet, has said though it is important to enforce law, humanitarian efforts must not be compromised.

Shocked to hear that on Christmas, Union Ministry FROZE ALL BANK ACCOUNTS of Mother Teresa’s Missionaries of Charity in India!

Their 22,000 patients & employees have been left without food & medicines.

While the law is paramount, humanitarian efforts must not be compromised.


The reason behind freezing the bank account of the charitable group has not been stated yet. Neither the government has stated an official word on it, nor the Missionaries of Charity organisation has issued an official statement on the matter.
Also Read:
AAP Shocks BJP, Congress; Sweeps Chandigarh Municipal Corporation Polls

Meanwhile, Vicar General, Archdiocese of Calcutta, has strongly condemned the actions of freezing the bank accounts of Missionaries of Charity, stating that the government have given a cruel Christmas gift to the poorest of the poor. In an official statement issued by Vicar General, Archdiocese of Calcutta, Fr. Dominic Gomes, he said, "In freezing the bank accounts of Missionaries of Charity Sisters and Brothers congregations, Government agencies have given a cruel Christmas gift to the poorest of the poor.  Besides over 22000 direct dependants and beneficiaries at their centres across the country, MC Sisters and Brothers reach out to uplift thousands and are often the only friends of the lepers and social outcast no one will even venture near." Expressing anguish over the actions of the central government against the organisation, Fr. Dominic Gomes stated that efforts of Missionery of Charity of St. Mother Teresa which encompasses in service to the poorest in every corner of the earth, especially our poorest of Indians have been overlooked. They have deemed the move as the latest attack on the Christian Community and their social outreach.  "We condemn the Government action against the MC and are appalled by the timing and lack of empathy to consider the humanitarian disaster this decision will cause," Fr. Dominic Gomes stated further.  As concern on religious intolerance grows in India, media reports have also stated Gujarat was investigating, on a complaint filed by Vadodara district social officer, whether the Missionaries of Charity forced girls in its shelter home there to wear a cross and read the Bible. Meanwhile, a statue of Jesus Christ was reportedly vandalised at the entrance of the Holy Redeemer Church in Haryana's Ambala by unidentified miscreants.  In 2018, it was reported by media that Indian officials were seeking to freeze bank accounts of the Missionaries of Charity, founded by St. Mother Teresa of Kolkata, following the arrest of a nun on child trafficking charges in Jharkhand state. At the time, Missionaries of Charity spokesperson Sunita Kumar told media outlet, that the broadening of investigations was a deliberate attempt to malign the work of the home for unwed mothers. She added that there was an intention to "harass and financially trouble" the congregation that St. Mother Teresa founded in 1950.