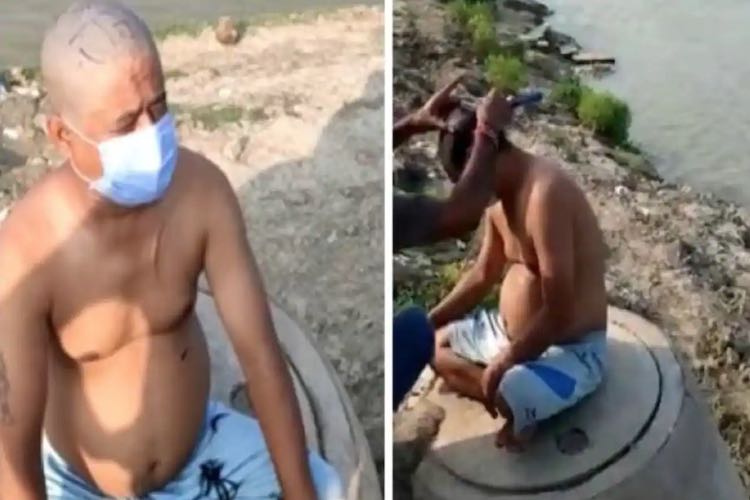 The impact of the deteriorating Nepal-India relationship is now affecting the lives of citizens of both countries. In Varanasi, the parliamentary constituency of Prime Minister Narendra Modi, a Nepali citizen’s head was forcefully shaved and ‘Jai Shri Ram’ was written on his skull. Then he was forced to chant ‘Jai Shree Ram’ and shouted slogans against Nepali Prime Minister KP Sharma Oli.

Arun Pathak and his supporters, the convenor of the saffron organisation Vishwa Hindu Sena, active in Varanasi have been accused of the shameful act. Accused Arun Pathak has uploaded the video on his Facebook handle. In the video, a Nepali citizen is reportedly seated near a river. There are no clothes on his upper body and slogans are being raised against Nepali PM KP Sharma Oli and Nepal. The man can also be seen praising India for giving work to Nepal citizens.

Pathak, justifying the incident on Facebook, has asked his supporters to shave the head of other Nepalis and write Jai Shri Ram on it. It is being said that the saffron organisation is agitated by the statement of Nepali PM Oli in which he told Lord Ram not Nepali but Indian.

The Varanasi police have assured action in the case but it can have an impact in Nepal as well. In Nepal too, the anger against the current Modi government is at the peak, due to which the movement of Indian citizens in Nepal has been banned. Along with India, Nepali security agencies also believe that if Indian citizens enter Nepal, then something unfortunate may happen to them.

There is an 1800-km-long international border between India and Nepal. Five states of India, Uttarakhand, Uttar Pradesh, Bihar, West Bengal, and Sikkim, share their border with Nepal, and thousands of people move from these states every day. But due to the current tension, the movement has come to a complete halt.