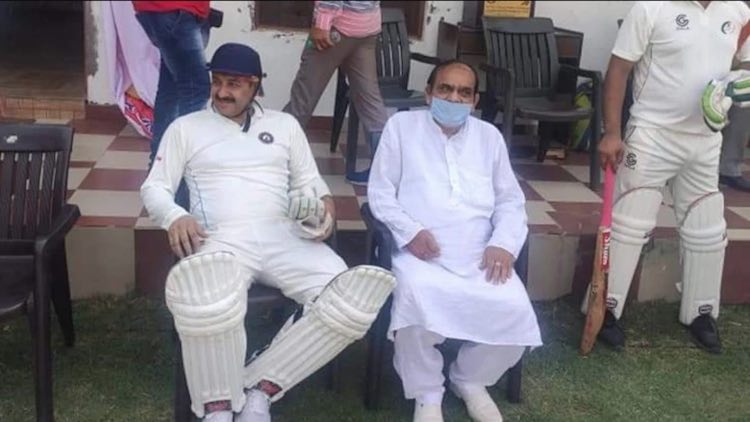 At a time when dealing with the coronavirus is becoming increasingly challenging in the country, leaders of the ruling party are coming across as careless about this pandemic. The person being accused of recklessness here is Delhi BJP President and BJP Member of Parliament (MP) Manoj Tiwari, who reached Sonipat despite the Delhi-Haryana border being sealed.
Also Read:
Maharashtra: 51 More Cops Test COVID-19 Positive, Overall 1,809 Infected

Over here, Manoj Tiwari even played a cricket match and did not even wear a mask while doing so. Physical distancing norms were also violated in Tiwari’s presence. Haryana’s BJP government had recently granted permission to players and common people to play in stadia, but had also clarified that there should be no crowding of any sort over there during this time. It is clearly visible in several photographs that Tiwari was present at the cricket academy for several hours without wearing a mask or following social distancing norms.  Not only this, but Tiwari himself also tweeted a video which showed him playing and wrote, “May God keep everyone steeped in sportsmanship. May everyone be healthy. May everyone’s immunity be strong.” However, after the video went viral, Tiwari claimed that he followed all the rules. "I have always followed social distancing, lockdown norms. MHA permitted the opening of stadiums without spectators. Based on that, I went there and played. All norms were followed," he said. This is not the first instance when a prominent BJP leader has done such a thing.  Before this, Tulsi Silawat, a Cabinet Minister in the Shivraj Singh Chouhan ministry, reached the Sanwer assembly seat in Madhya Pradesh’s Indore to meet party workers.  Preparations are underway here for the forthcoming by-elections. Also accompanying him at the time were Indore MP Shankar Lalwani and BJP MLA Ramesh Mendola. At that time too, bypassing lockdown guidelines, all the BJP leaders had recklessly flouted physical distancing norms.