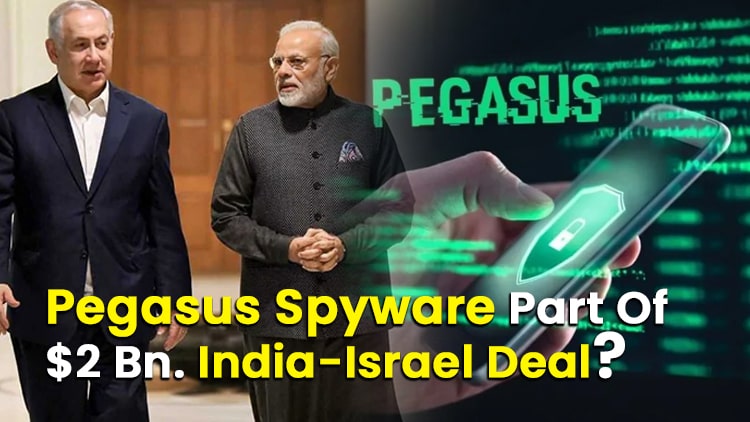 The issue of the Pegasus snooping software, or spyware, being deployed by the Modi government at the Centre to spy on a variety of targets, has come into the spotlight again, with a New York Times report claiming that the software was part of a deal between the Indian and Israeli governments worth $2 billion. India And Israel Closeness After 2017 Led To Pegasus Sale
Also Read:
Budget 2022: Trade Deficit with China Tops the Charts

RECAP WATCH: What Did CJI, Politicians Say After SC Pegasus Spyware Snoopgate Verdict? The NYT report is titled ‘The Battle For The World’s Most Powerful Cyberweapon’. The report mentions that Narendra Modi became the first Indian Prime Minister to visit Israel dspte its official stance of “commitment to the Palestinian cause”. The report states: “Their countries had agreed on the sale of a package of sophisticated weapons and intelligence gear worth roughly USD 2 billion -- with Pegasus and a missile system as the centerpieces” The report then says that the then Israeli Prime Minister Benjamin Netanyahu visited India in 2019, after which India broke its established precedent and voted with israelto deny observer status to a Palestinian rights organization at the UN's Economic and Social Council. Therefore, the report’s claim is that the Pegasus spyware was transacted agsinst the backdrop of deepening India-Israel ties. Congress Lashes Out At Modi Govt. Over Report  Government sources, on the other hand, have dismissed the report as “baseless”, according to the channel News18, but there has been no reaction or statement from the political leadership of the ruling party BJP as yet. The Congress, on the other hand, has demanded to know “why the Prime Minister is silent”. The political opposition has been actively attempting to corner the government on this issue ever since last year. Rahul Gandhi, former president of Congress and an MP from Wayanad, repeated his allegation today that acquiring the Pegasus spyware for use against politicians, judiciary, government officials, journalists, and civil society members amounts to “treason” against the country.

Modi Govt bought Pegasus to spy on our primary democratic institutions, politicians and public. Govt functionaries, opposition leaders, armed forces, judiciary all were targeted by these phone tappings. This is treason.

Leader of Opposition in Rajya Sabha, Mallikarjun Kharge, also described the gvernment's actions in the same terms. Pegasus Case In Supreme Court, Expert Committee Report Due A clutch of petitions by litigants claiming to be affected by the software is being heard by the Supreme Court, which last issued an order in October 2021, forming an Expert Committee to probe the case and examine, among other things, whether the software was used by the government. The Supreme Court had refused to accept the government’s position that it cannt clarify whether or not the Pegasus spyware was used or bought due to “national security”, and said that the government’s decision are subject to judicial review, particularly in a matter where individual rights to privacy, freedom of speech, and press freedoms, are concerned. READ: SC On Pegasus: Can't Remain Mute Spectator On 'National Security' Grounds