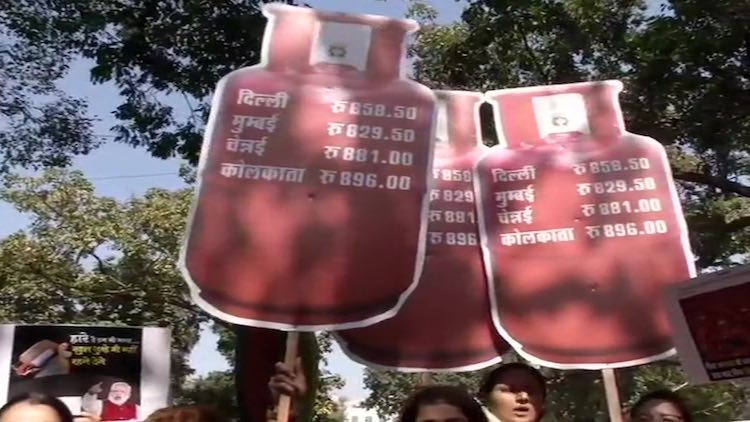 The common citizen is having to increasingly bear the brunt of an economic slowdown and record-breaking inflation. While the central government has increased the price of one non-subsidised LPG cylinder by Rs 150, the retail inflation in January 2020 is at the highest level since May 2014. Opposition parties have now begun cornering the government on this issue. Sushmita Dev, President, All India Mahila Congress, reached the Petroleum and Gas Ministry with a flash mob and tried to enter the premises after breaking down a gate. She wanted to know if this is the Modi government’s ‘Sabka Saath, Sabka Vikas’. Also Read: Private Coaching Classes A Boon In Srinagar

CPI (M) leader Mohd. Saleem rebuked the government on pernicious inflation and said that it has failed on the economic front. Meanwhile, new data from the Union Ministry of Statistics shows that retail inflation in January 2020 reached 7.59%, which is the highest level in PM Narendra Modi’s six-year tenure. The public has also begun strongly lamenting the hike of Rs 150 in the price of cooking gas.  Prices of food and beverages have been on the rise since November 2019, when the retail inflation rate for food and beverages was 5.54%, which increased to 7.35% in December 2019 and rose to 11.8% in January 2020. The prices of vegetables for January 2020, as compared to January 2019, are 50.19% higher, the prices of meat, fish and eggs are 10.5% higher and the prices of pulses are 16.71% costlier. The Reserve Bank of India had aimed to limit the inflation rate to 4%, with the scope of 2% deduction and growth. With the retail inflation rate reaching 7.59%, it is evident that inflation is currently out of control.