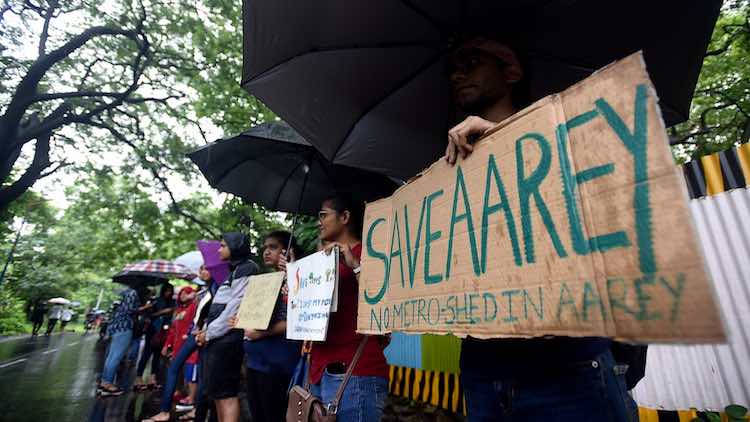 Nature activists have now taken to the streets against tree felling in Mumbai’s Aarey Colony. They have alleged that out of 2,600 trees to be felled, 200 have been cut on Friday itself. Meanwhile, police have arrested more than 100 people who were protesting against tree felling. In Maharashtra, amid assembly elections, the matter of tree felling in Mumbai’s Aarey Colony has become a heated topic. On Friday, after the Bombay High Court dismissed all petitions to declare Aarey Colony as a jungle, BMC started felling trees from Friday itself. Also Read: Floods Claim More Than 1600 Lives, 22 Lakh People Displaced

On receiving the news of tree felling, many nature activists reached the spot and raised slogans at the Metro site. Activists alleged that out of the 2,600 trees to be cut, 200 trees had been felled on Friday itself. Meanwhile, police arrested more than 100 people who were protesting against tree felling.  In this matter, Aditya Thackeray, son of Shiv Sena chief Uddhav Thackeray and youth wing head, does not agree with the decision of the Maharashtra government. One after the other, Aditya Thackeray tweeted many times and targeted both the Maharashtra government and the Central government over the issue of tree felling. He said Mumbai Metro is finishing off all those things which India had talked about at the United Nations. Aditya Thackeray also said that such a project should be executed with pride but the Metro project is being carried out in the dark of night with embarrassment and amid heavy police protection. Meanwhile, personalities from Bollywood and civil society are also protesting tree felling in Aarey Colony. Watch the full story here:

Outrage & protest from Mumbaikars in #Aarey as Mumbai Metro Rail Corporation Limited (MMRCL) starts chopping of trees for the construction of Metro rail car-shed. Several celebrities have lent support to the protest through their social media handles. #AareyForest pic.twitter.com/QaItgHDHtf