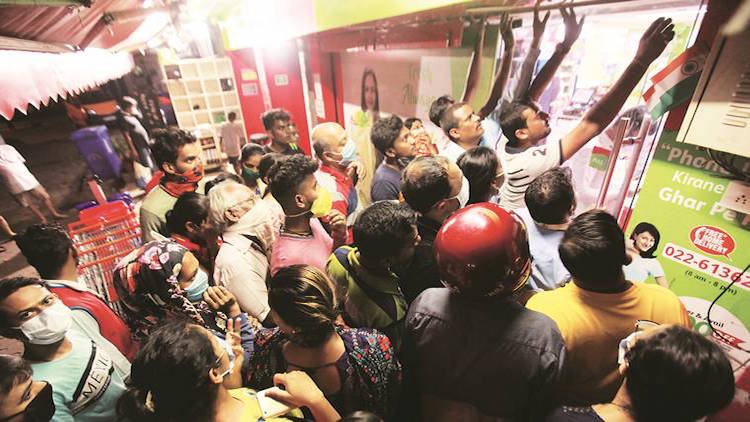 In view of the growing hazard from the coronavirus, the entire country has been put under lockdown for 21 days. Along with this announcement, PM Modi also said that the shortage of essential commodities will not be allowed to happen in the country. However, despite this, people in large numbers stepped out of their homes in several states and there was an atmosphere of chaos in markets on Tuesday night. Huge crowds were seen at shops selling vegetables, milk, bread, groceries and medicines. Also Read: India COVID-19 Cases Rise To 562

Shortage of essentials items has begun in Noida. Several states have taken strict action against people violating the lockdown. On Tuesday, more than 400 cases were filed in various parts of Kerala. Telangana Chief Minister K Chandrashekhar Rao has said that the military’s help was sought for compliance with the lockdown in the United States. If people do not comply with the lockdown in Telangana, then a 24-hour curfew will have to be imposed and shoot-at-sight orders will be issued in the state. CM Rao appealed to people not to create such a situation in the state. Meanwhile, a 29-year-old man has been found to be coronavirus positive in Bihar. He has been admitted to the Nalanda Medical College in Patna. He had arrived in Patna after a visit to Gujarat’s Bhavnagar. The total number of coronavirus patients in the state has reached four.  According to Gujarat Chief Secretary Anil Mukim, after two new coronavirus patients were found in Rajkot, the number of patients in the state has reached 35. Given the 21-day lockdown, the Central government has indefinitely postponed work on the National Population Register and the first phase of Census 2021. Both these tasks had to be carried out between April 1 and September 30, 2020. Protests against the Citizenship Amendment Act, National Population Register and National Register of Citizens had been underway across the country and now, all protests have ended. Amid this, according to new data from the Indian Council of Medical Research, the number of coronavirus patients across the country has reached 536. The worries of the Central and state governments are increasing with the daily rise in the number of patients. Meanwhile, this disease had been brought under control to a large extent in South Korea but now, with more than 100 new patients being found, pandemonium prevails there. At present, the number of coronavirus patients across the world has crossed 4 lakh 22 thousand and more than 19,000 people have succumbed to this disease so far.

Panic buying swamps stores as the nation went into a #21daylockdown. Despite PM's announcement to not hoard goods, customers are worried and clueless about how things are going to work out. #Noida residents claimed that there is already a shortage of daily goods#panicbuying pic.twitter.com/jUkgNBh8LN