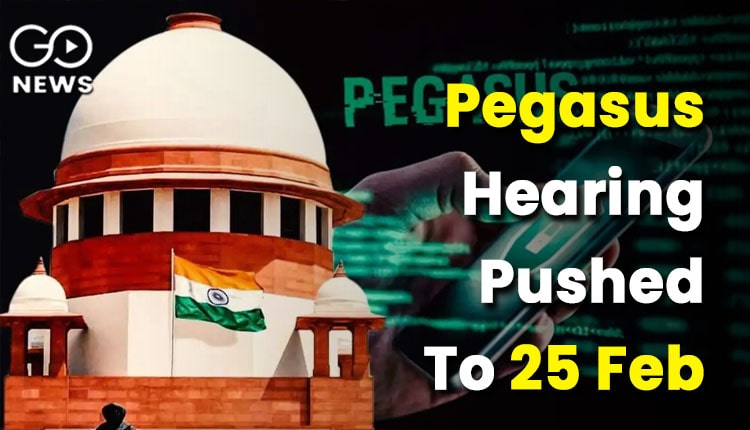 The Supreme Court postponed the Pegasus case on Tuesday for Friday, February 25. The case was scheduled to be reviewed the next day, on February 23. Tushar Mehta, the Solicitor General of India, informed the Chief Justice of India that he would be unable to present in the case tomorrow due to a prior commitment. CJI NV Ramanna agreed and deferred the case until a later date.
Also Read:
‘High Court Chalo’: The Other ‘Row’ In Karnataka That Missed The Media Glare!

Pegasus spyware was used to target politicians, journalists, and activists across Russia. On July 18, a media organisation in India disclosed the matter, claiming to have tracked hundreds of people in coordination with overseas organisations. The case was heard by the CJI himself after the parties involved went to court, and a technical team was formed to conduct the investigation. The same technical team has now delivered an interim report to the court in this case. A bench consisting of CJI NV Ramana, Justice Surya Kant, and Justice Hima Kohli would examine the report, as well as other petitions pertaining to the case. In October of last year, the court appointed a committee led by retired Supreme Court judge Justice RV Raveendran to investigate the subject as soon as possible and provide a report. Justice Raveendran's team includes retired IPS officer Alok Joshi from the 1976 batch, technology expert Dr. Sandeep Oberoi, and cyber security expert Dr. Navin Choudhary. Apart from these, the committee led by Justice Ravindran included Professor Dr. Charhan P. of Amrita Vishwa Vidyapeetham in Kerala and Dr. Ashwin Anil Gumaste of IIT Bombay. It should be noted that, while emphasising the significance of free speech and the press, and expressing worry about illegal surveillance, the bench of CJI NV Ramanna noted that national security reasons are not immune from judicial examination. The Central Government stated at the Supreme Court hearing on the Pegasus spying case that its information could not be made public because it was a matter of national security. The government cannot get a free pass by blaming national security, according to the Supreme Court. The Center has long challenged the Supreme Court's use of Pegasus, describing it as a matter of "national security," and has refused to make the case public. Before the court, the Center requested the formation of an independent committee, but the court rejected the suggestion and formed its own committee. It's now up to the Supreme Court committee to reveal what it finds in its interim report.