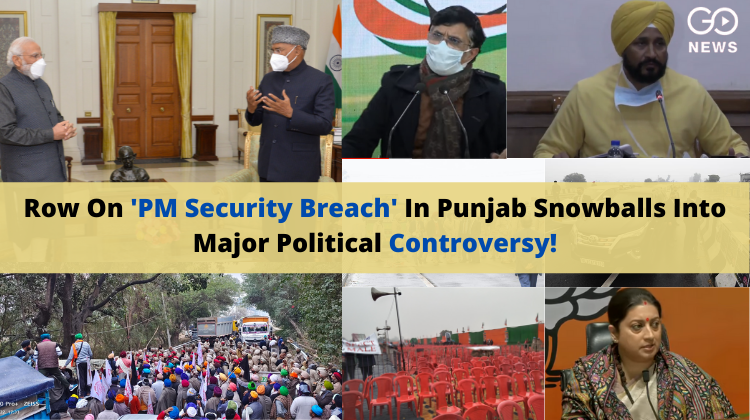 The Prime Minister, Narendra Modi, was on an electoral visit to Punjab yesterday to the district of Ferozepur, a rally which eventually had to be cancelled because of ‘bad weather’ preventing a direct helicopter flight, and the supposed security threat to the Modi after his convoy of vehicles was blocked by protestors on its way to the rally site in Hussainiwala.

President Ram Nath Kovind met PM Narendra Modi at Rashtrapati Bhavan today and received from him a first-hand account of the security breach in his convoy in Punjab yesterday. The President expressed his concerns about the serious lapse: Rashtrapati Bhavan pic.twitter.com/pC6IVYkYXB

The PM was stuck on a flyover for close to 15 minutes and this fact has been seized upon by the Home Ministry and the ruling BJP, which has sharpened its attacks on the Congress which is ruling in the state.
Also Read:
Saw Bribery In "PM's Name" In Kashmir, Claims Satyapal Malik

The Supreme Court is due to hear a plea tomorrow on January 7th regarding Punjab police’s “connivance” in the security lapse of the PM’s convoy. The petition has been filed by an NGO ‘Lawyer’s Voice’. The political fallout of the ‘security breach episode involving the Prime Minister’s electoral visit to Ferozepur, Punjab, has escalated today with various calls for imposing President’s rule in the state after the Prime Minister’s meeting with the President today to the Rashtrapati Bhawan. Home Ministry Releases Statement, ‘Security Lapse’ Blamed On Punjab Govt The Ministry of Home Affairs had released a statement in which it squarely blamed the Punjab government and administration in the case of the alleged ‘security breach’ of the PM’s convoy which the government is alleging was “deliberate”. In yesterday’s statement by the Ministry spokesperson, it was said that the Prime Minister was travelling to the National Martyr’s Memorial in Hussainiwala and his route was blocked by protestors. Due to this, he was stuck on a flyover for 15-20 minutes, which caused a ‘security scare’ as per various media outlets and the government itself. The Home Ministry’s statement yesterday read: “Around 30 km away from the National Martyrs Memorial in Hussainiwala, when the Prime Minister’s convoy reached a flyover, it was found that the road was blocked by some protestors. The Prime Minister was stuck on a flyover for 15-20 minutes. This was a major lapse in the security of the Prime Minister”. BJP Hot On Heels Of Congress Govt, Party Strikes Back Uttar Pradesh CM Yogi Adityanath said that the Punjab government should apologize for the incident. Similarly, Uttar Pradesh deputy chief minister Keshav Prasad Maurya said to a media channel that there should be an “investigation” on the entire Punjab government. The BJP is also prganizing 'prayers' and rituals across the country for the "safety" of the Prime Minister. The Chief Minister of Assam, Hemant Sarma Biswa, was also seen at one of these 'poojas'. The BJP’s Punjab state unit chief Ashwani Sharma led a delegation of party leaders to the governor, asking that the home minister and DGP of the state be sacked for this lapse, which they said was deliberate on part of the Channi government. On its part, the Congress leadership at the state and national level have also hit back with their own comments. National level spokespersons Randeep Surjewala said yesterday that the Prime Minister himself got embarrassed because of the poor turnout at the rally and was trying to deflect attention from that. Punjab Chief Minister Charanjit Singh Channi said that his government or officials are not to be blamed for it even as he expressed ‘regret’ over the incident. Former CM and Congress leader Amarinder Singh, now aligned with the BJP-SAD combine as head of his own party, said “what happened today was shameful and disgraceful and the government and the Chief Minister cannot escape the responsibility for it”. Today, Pawan Khera spoke on behalf of Congress again and said that to link the episode as a criticism of ‘Punjabiyat’ (Punjabi-ness) was an unacceptable insult. He also said that the Prime Minister should have stopped and had some form of dialogue with the protestors, or at least have given 15 minutes to local police to clear the way.