Power Outage In 21 UP Districts, Including Minister’s House As Workers Strike Against Privatisation 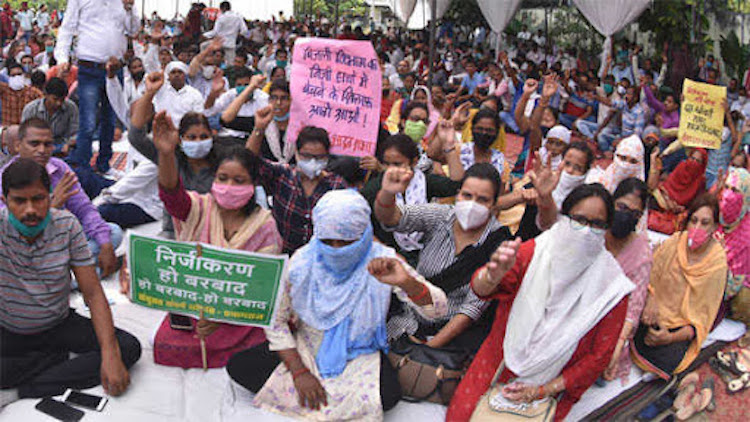 Employees of Purvanchal Vidyut Vitran Nigam Limited in Uttar Pradesh have gone on a strike against the privatisation of the power distribution company. Due to this, there was power blackout for several hours in many districts including Varanasi, Deoria, Chandauli, Barabanki, Prayagraj, Mirzapur, Ghazipur, Azamgarh, Bhadohi, causing the public to suffer. Due to administration failure and technical fault, the power supply failed in many areas from the city to the countryside since the afternoon. Due to the strike, residences of many ministers and legislators, including UP Power Minister Shrikant Sharma himself, were also in the dark for hours.
Also Read:
‘Reprehensible’: Editors Guild Condemns UP Govt For Obstructing Media Coverage On Hath

The power workers gathered at PVVNL Headquarters launched a strong attack on the government to protest against privatisation. Apart from this, employees also protested in many places in different ways. Havan was done in many places to knock some sense in the UP government. In many places, torch rallies were carried out amid fierce sloganeering in protest. Raman Chaturvedi, a junior engineer working in the electricity department in Mirzapur district of Uttar Pradesh, said that at this time UPPCL distributes electricity throughout UP and now the government has decided that power distribution will be made private in all 21 districts of Purvanchal. Angry employees said that due to privatisation, their work will be given to the private company and they can lay us off at any time. He said that Purvanchal Vidyut Vitran Nigam Limited has 35,000 government employees in Purvanchal and about 70,000 employees are working on a contract basis. Now almost everyone's job is at risk, that's why all are on strike. The power system across the district collapsed after the electricity workers went on strike. Local faults, breakdowns, feeder shortfalls at various places disrupted supply and affected hundreds of villages. During this time, cash counters and the office were closed; neither bills can be collected nor connection related work can be done. People had to return despairingly. Employees clearly say that the protest will continue until the government reverses its decision.