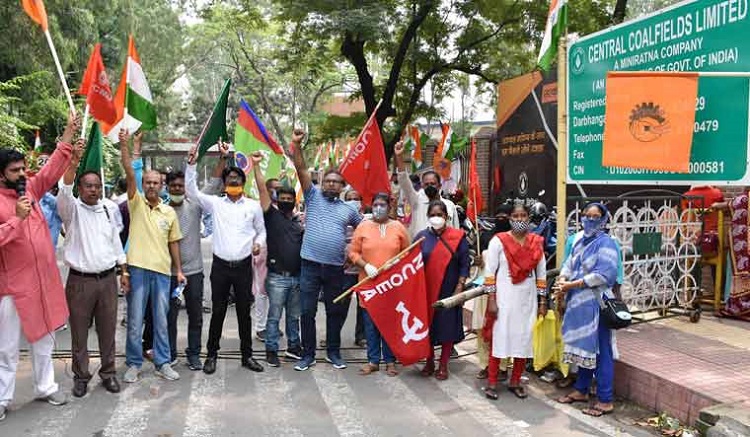 The Central Government has opened the doors of the coal sector to private companies for commercial mining, but labour organisations have started a strike. Calling the government’s move ‘anti-worker’, up to five lakh workers from the coal sector, supported by national trade unions, went on a three-day strike last week in protest against the Centre’s move to open up the sector to private players. Thousands of them are now being penalised with wage cuts as the unrest continues.
Also Read:
WHO Acknowledges 'Evidence Emerging' Of Airborne Spread Of Coronavirus

In the first round of the strike, five lakh coal workers took a three-day strike last week which was supported by AITUC, CITU, ACTU, INTUC, BMS and HMS. Labour organisations demand that the Central Government withdraw the decision of commercial mining for private companies. Apart from this, there are demands to stop privatisation of the coal industry, reasonable wages for contract labourers and complete implementation of the National Coal Wage Agreement. Officials said that during the three-day strike, there was a revenue loss of about Rs 400 crore and coal production dropped by 56% on an average every day. Coal India produces an average of 1.3 million tonnes of coal every day. Following which Mahanadi Coalfields Limited (MCL), a subsidiary of Coal India (CIL) ordered an eight-day salary cut for its employees who went on a strike from July 2 to July 5 to protest against the private competition. MCL Chairman and Managing Director B.N. Shukla, who is in favour of the Central Government's decision, said the entry of private companies into the coal sector is the need of the hour. MCL said that the strike was illegal in which about 80% of its 20,000 workers did not report for work. The notice issued on July 3 stated “it is noted… the employees… who have participated in this illegal strike… is a violation of rule 26.10 of the certified standing orders of MCL. In view of this misconduct on their part, eight days wage deduction as per Section 20 of the Code on Wages Act 2019, is hereby ordered for their act of participation in the illegal strike.” This is the second time when workers' wages are being cut due to the strike. A similar order was issued earlier in 2010. At that time, a section of the employees went on a one-day strike.  Now the unions have set the date for the next strike on August 18, which is the last day to submit bids for commercial coal mining. On 18 June, Prime Minister Narendra Modi launched the auction process of 41 coal blocks for commercial mining.  The Jharkhand government has moved the Supreme Court challenging the Centre’s decision and demanding a ban on it, stating the need to take the respective State governments into confidence in the auction. Similarly, in Chhattisgarh, nine sarpanchs from the Hasdev Arand region have written a letter to Prime Minister Modi expressing deep concern over the mining auction. They wrote in the letter that the community is totally dependent on the forest, the destruction of which will endanger the entire existence of the people here. Meanwhile, Coal India made an appeal to the workers not to go on strike. In a tweet, Coal India said, ‘Be assured... commercial coal mining is not a worry for Coal India.' Watch the video report here: