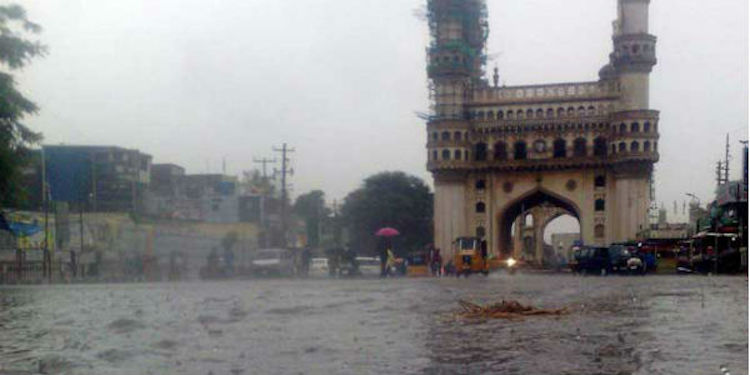 At least 15 people were killed in the last 24 hours as heavy rains lashed parts of Hyderabad, leading to waterlogging at various places and inundation of some low-lying areas. Due to heavy rains in Hyderabad, nine people died simultaneously in the Mohammedia Hills of Bandalaguda on Tuesday.
Also Read:
3 Indians Abducted Every Hour For Forced Marriage: NCRB

In a separate incident, a 40-year-old woman and her 15-year-old daughter died after the roof of their old house collapsed in Ibrahimpatnam area.

Telangana: Water logging in parts of Hyderabad following heavy rainfall in the city; visuals from near Vanasthalipuram area. (13.11) pic.twitter.com/5LQYDt511d

Several inundated areas include Attapur Main Road, Musheerabad, Toli Chowki area and Dammiguda. Traffic also came to a standstill. Rain water has also entered the houses, while a car swept away in rainwater in Dammaiiguda area.

#WATCH: A vehicle washes away in Dammaiguda area of Hyderabad following heavy rain in the city. #Telangana (13.11) pic.twitter.com/B6Jvyu665Z

#WATCH Hyderabad: State Disaster Response and Fire Services Department rescued people in Toli Chowki area, that has been water-logged due to incessant rain in the city. #Telangana (13.11) pic.twitter.com/39LOvayCD1

Telangana Chief Secretary Somesh Kumar said that Hyderabad has received 20 cm of rain in the last 24 hours, while LB Nagar received 25 cm of rain in 24 hours. Chief Minister Chandrashekhar Rao sought a report on the situation after heavy rain across cities including Hyderabad and asked the district administration to be vigilant. Due to heavy rain, Osmania University and Jawaharlal Nehru Technical University have postponed all examinations for the next two days.