Chances are that the granite stone counter-top in your kitchen came from Rajasthan, especially if you live in north India. While granite is also found in several southern states, transporting it from the south to cities in the north significantly pushes up the price. However, while buying the stone from Rajasthan may be cheaper, it continues to come at a heavy price for the workers who extract it or those involved in cutting, polishing and preparing it for kitchen tops, flooring or even statues and other artifacts. Over thirty-lakh workers are believed to be exposed to life-threatening silica dust which is kicked up while extracting or working with several minerals and stones. Granite contains the highest concentrations of silica.
Also Read:
India Beat South Africa By 203 Runs In First Test

Ganesh Kumar had never heard about silicosis or silica dust. He and his elder brother also had no option but to take up work in a stone quarry near Ajmer when their father died. Ganesh was 14 when he started working in the mine. Chiselling stone and drilling holes to put dynamite to blast open the rock, this was the only work available and the only way to earn for his family. Then, 14 years later he could work no more. Both he and his brother had silicosis. Almost a decade of working in the stone quarry without any protective mask and daily forced to breathe in the fine silica-coated dust, scarred their lungs making breathing difficult. “I used to be able to lift fifty kilos earlier, now I can barely lift my almost-two-year-old child," Ganesh said, adding that there are days when I have a tough time even walking to a nearby open field to relieve myself in the morning. Rajasthan has the highest number of mining leases in India. Almost 190 major minerals and over 15,000 minor minerals are found and mined in Rajasthan. In fact, after agriculture, mining is the second biggest source of employment in the state. 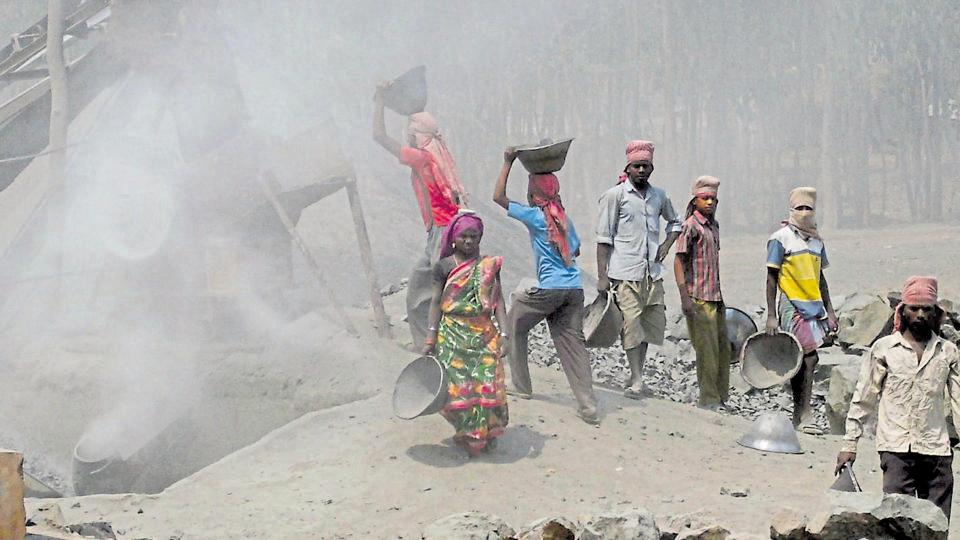 Perhaps realising the enormity of the human health crisis, the state government this week announced a special policy on ‘Pneumoconiosis including silicosis detection, prevention control and rehabilitation’. Till now relief was being provided based on administrative instructions and circulars. Under the new rules, silicosis patients will get the same benefits as available to those with disabilities. The scheme also includes financial support for education and marriage of orphans whose parents have died due to silicosis apart from monthly pensions to support the family. Chief Minister Ashok Gehlot who unveiled the policy in Jaipur last Thursday said that with this the government aimed to not only support patients but also ensure no on gets silicosis. "This is the only policy in the country which is so transparent and for which a special online web portal has been created where patients can register, log in and even apply to get tested. We are working to make sure there is no middleman involved so that the benefits can reach the intended victims," said Nikhil Dey, noted transparency campaigner who has worked closely with the state government in shaping the new policy. Dey, who also works with a Rajasthan based grassroots organisation, the Mazdoor Kishan Shakti Sangthan (MKSS), said that while Haryana was the first state to come out with a policy on silicosis but it had limited impact. In Rajasthan, which has the lions share of stone quarries and mines, the problem is much bigger and this comprehensive policy should help as it also brings together five different departments and ministries of the government including health, mining, and finance to ensure that there is greater coordination among government agencies. The policy also lays emphasis on educating both mine workers and mine owners about their safety and also a liability in case the workers are not given adequate safety gear. Silicosis is a painful condition with those suffering from it literally have to battle for each breath. Often families have to shell out Rs 300-500 every day for oxygen gas cylinders. The policy aims at granting Rs 3 lakh as one-time assistance to those people certified. "I have had to take loans to afford the daily oxygen cylinders without which I would not be able to survive, hopefully if I get assistance while I am alive, I can pay off the loans I have taken," said Durga a 28-year-old silicosis patient from Jodhpur. While the policy is being hailed by civil society and health workers as the most comprehensive in the country, the hope is that it will help ease the suffering of millions of patients and their families and also prevent others from getting silicosis.