Russia-Ukraine Conflict Discussed In Lok Sabha: What Did Leaders Say? 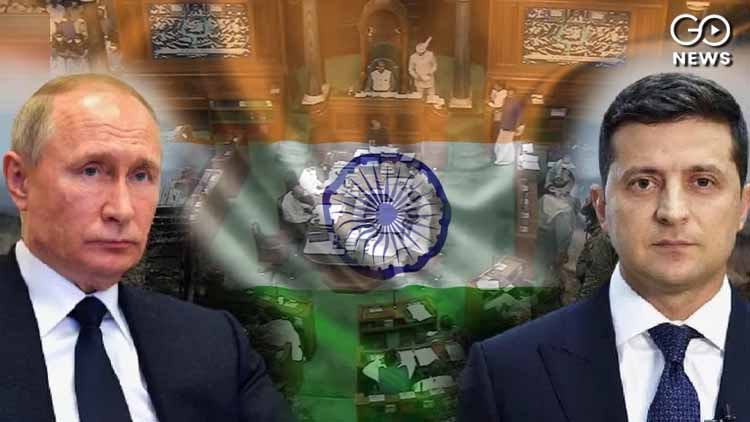 The Lok Sabha discussed the ongoing war between Russia and Ukraine today, with the government defending its evacuations and warning efforts and opposition MP’s questioning the handling of the evacuation process and its bid to take credit for the same. Civil Aviation Minister Jyotiraditya Scindia said that India was one of the first countries to issue advisories to citizens as the conflict built up and progressed. He also said that in an “interconnected world”, the impacts of major events are felt in all countries.
Also Read:
Russian Ruble And Stock Market Rallying Despite Sanctions

“We heard a lot of things like why advisories were not issued on time? I would to inform you that India was one of the few countries who issued an advisory first- on February 15, followed by advisories on February 18, 20 and 21” Law Minister Kiren Rijiju said that the Indian ‘embassy’ is working “day and night” amid the conflict and thus it is not proper to criticize ‘what is being done’. He also claimed that “there should be no disagreements in the House on matters of foreign policy” and named MPs Shashi Tharoor and Jayram Ramesh. He also commented that 23,000 Indians were evacuated, and said that in those [difficult] conditions, “if someone offers you a cup of tea… one remains grateful forever” and went on to add that “responsible political leaders” made “problematic” statements at home while diplomats worked “24x7”. Opposition Statements In The House The NCP’s Supriya Sule termed the ongoing conflict as a “genocide” and then said that she wants peace for “both nations”. On the international level, India has abstained from multiple UN votes condemning the Russian offensive as an ‘invasion’ of Ukraine, sticking to calling for ‘dialogue and diplomacy’. The term “genocide” was recently used by President Volodymyr Zelenskyy to accuse Russia for alleged actions in Bucha and Mariupol. She congratulated the government and the Operation Ganga but called out the “jingoism” as unfortunate. BJD MP Pinaki Misra praised India’s policy based on the Non Alignment Movement (NAM) and said that India was right in taking a stand against US “hectoring” but now must watch out for an emerging “Russia-China axis”. M.K. Prechandaran, MP from Kollam, Kerala, said that there were “strategic flaws” in the evacuation process even as he commended Operation Ganga. He said that the House should consider proposals for the future of the medical students who returned from Ukraine. He noted that India’s diplomatic statements lacked criticism of Russia and said that caution must be maintained while attempting to circumvent financial sanctions on Russia. ‘Russia Junior Partner Of China’ Says Shashi Tharoor Congress MP Shashi Tharoor said that other embassies were “quicker off the mark” in starting evacuations that New Delhi and there is “no harm in admitting that”. He also said that there were issues with domestic transportation of students within Ukraine as they tried to reach exit points at the border: “in getting them to those countries, I am afraid, we were perhaps found somewhat lacking”, Mr. Tharoor said. He also termed India’s “publicity mongering” in neighboring countries as “unfortunate”. A video had circulated online of Jyotiraditya Scindia being interrupted aggressively by a Romanian mayor as he was talking to students, praising the government’s efforts. Mr. Tharoor mentioned India’s defence ties with Russia and said that “the seller needs the buyer” and vice-versa, referring to India’s large arms imports from Russia. He also said: “Refusing to condemn Russia is not the same as endorsing Russia’s actions. We must also remember that Russia, which is a junior partner to China will be of major concern to India.” Other remarks were made by National Conference leader Farooq Abdullah, DMK’s Sumathy Thangapandian, and Manish Tewari.