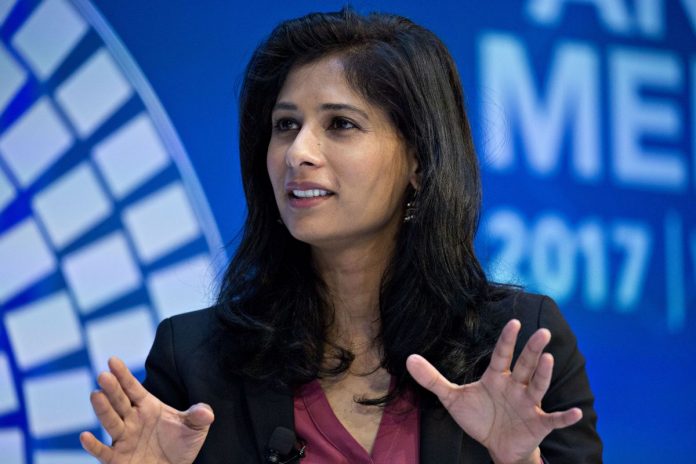 Gita Gopinath, Chief Economist of the International Monetary Fund (IMF), has held the troubled Indian economy responsible for the global economic recession. This claim by Gopinath has deflated the Central government’s assertion that the global recession was to blame for the distress in the Indian economy. Entire Bharatiya Janata Party, including Home Minister Amit Shah, has been openly blaming the global recession for the slowdown in the Indian economy, which is largely due to the economic policies of the Central government.  Also Read: Human-To-Human Transfer Of Deadly China Virus Confirmed

Now, Gita Gopinath has refuted these claims of the Modi government and said that the global economy has been left tottering because of weakening Non-Banking Financial Institutions and reduced income in rural areas of India.

.@IMFNews Chief Economist, @GitaGopinath: India is the biggest contributor to the downward revision of 0.2% for three years where growth slowed sharply, owing to stress in the Non-Bank #FinancialSector and weak #rural #income growth#banking #investment #NBFS pic.twitter.com/Ckv3kFR7Pg

Gopinath has termed India as the biggest reason for the global recession. Along with this, the IMF has downgraded the estimate for the economic growth rate for India in the year 2019 to 4.8%. On the other hand, the economic growth rate for China is estimated to increase by 0.2% to 0.6% in the year 2020. This is because of the first phase of the trade deal between China and the United States. The statement by Gopinath has put paid to the assertion by Home Minister Amit Shah that the economic sluggishness is temporary and India will soon overcome it. Gopinath also said that it is not clear if the global growth rate in the year 2020 will see an upswing. She held developing economies like India, Mexico, and Brazil directly responsible for this because their performance has been below expectations.
TAGS rural income growth NBFC Economic Slowdown Gita Gopinath IMF Chief Economist IMF