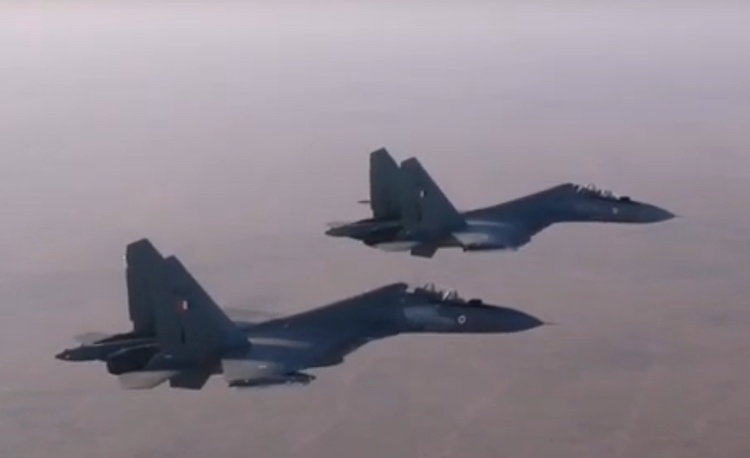 A water salute was given to the first SU-30MKI fighter aircraft at the induction of the 222 ‘Tigersharks’ fighter squadron at the Thanjavur air base. While there are presently six fighter jets, the squadron strenght is to be upscaled to 18. Chief of Defence Staff General Bipin Rawat and Air Force Chief Air Marshal RKS Bhadauria were present when South India saw its first squadron of the multirole Sukhoi-30MKI fighter jets.

#WATCH Water salute being given to the SU-30MKI fighter aircraft at the induction of the 222 ‘Tigersharks’ fighter squadron at the Thanjavur air base. pic.twitter.com/pMO9ugtZgO

The fighter jet has been modified to carry the BrahMos supersonic cruise missiles. IAF Chief Air Chief Marshal RKS Bhadauria said that the decision to deploy the Su-30 MKI at Thanjavur was taken due to its strategic location.    The SU-30 MKI is a twin seater twin engine multirole fighter of Russian origin which carries One X 30mm GSH gun along with 8000 kg external armament. It is capable of carrying a variety of medium-range guided air to air missiles with active or semi-active radar or Infra red homing close range missiles. It has a max speed of 2500 km/hr (Mach 2.35). It was last year in May that the IAF successfully fired the BrahMos air version missile from the Su-30 MKI fighter aircraft.  The air launched BrahMos missile is a 2.5 ton supersonic air to surface cruise missile with ranges of close to 300 km, designed and developed by BAPL. The IAF became the first Air Force in the world to have successfully fired an air launched 2.8 Mach surface attack missile of this category on a sea target on 22 Nov 17.

"The BrahMos missile provides Indian Air Force a much desired capability to strike from large stand-off ranges on any target at sea or on land with pinpoint accuracy by day or night and in all weather conditions. The capability of the missile coupled with the superlative performance of the Su-30MKI aircraft gives the IAF the desired strategic reach", the MoD stated.