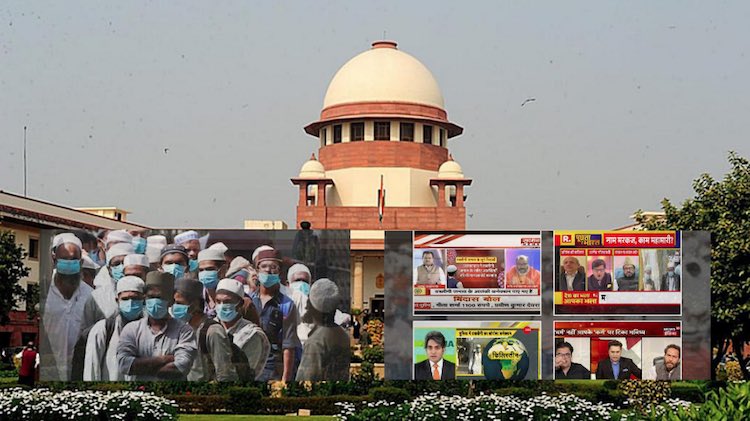 The Supreme Court on Tuesday expressed displeasure over the affidavit filed by the Centre regarding the media reporting of Tablighi Jamaat congregation during the COVID-19 outbreak in the country. The court had sought the details of the action taken against the media channels for wrong reporting in this matter from the Central Government. CJI SA Bobde, hearing the case, said that "we are not satisfied with the affidavit". The Bench comprising Justices AS Bopanna and V Ramasubramian said, 'We wanted you to tell as to what actions you have taken under the Cable TV Network Act. There is no information about this in the affidavit. We should tell you that we are disappointed with the Centre's affidavit in these matters.”
Also Read:
COVID-19: India’s Daily Cases Below 30,000 For 1st Time In 4 Months, Delhi Situation ‘

CJI SA Bobde said, " “We want to know the mechanism employed by you and this affidavit has nothing on it. Why should we refer to NBSA etc. when you have the authority to look into it. If it does exist you create authority else we will hand it over to an outside agency”. The Supreme Court is hearing a batch of petitions seeking action against media institutions spreading communal propaganda. The petitioners say that many TV channels carried out communal propaganda under a campaign against the Tablighi Jamaat. In this regard, the court had sought information from the Centre about the action taken against such channels under the Cable TV Network (Regulation) Act-1995. During the hearing of the case on Tuesday, the Supreme Court said that the Centre did not give any such information in its affidavit. Also, no specific answer was given by the Centre regarding the Cable TV Act. Solicitor General Tushar Mehta said before the court that there is no rule for regulating the content of electronic media. Regarding this, the court reacted sharply, "If there is no mechanism, then make it." Earlier, on October 18, the court had criticised the Centre for not having information in the affidavit. After this, the Centre filed another affidavit on Monday, on which the court again expressed dissatisfaction. Now once again, Solicitor General Tushar Mehta has sought an extension of three weeks to file the affidavit. There has been a debate in recent times about media regulations. News channels are constantly in controversy over methods of reporting and obscenity of content. Whether it is the case of Sushant's suicide, the Tablighi Jamaat or the case of Sudarshan TV's alleged 'UPSC Jihad' program, the press has come under intense criticism.