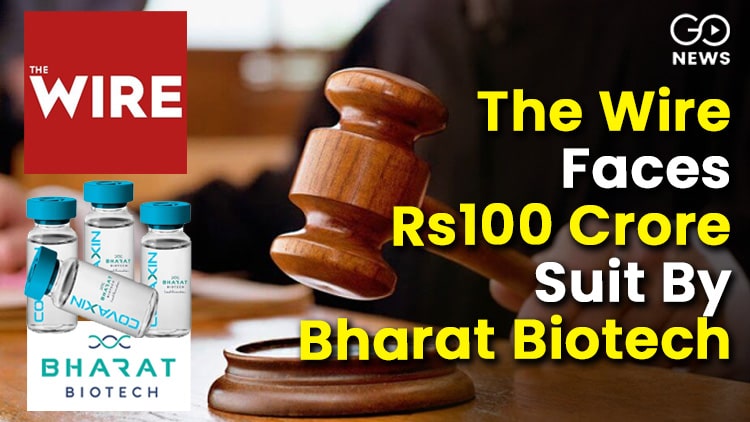 A Telangana court has ordered online news portal, The Wire, to remove 14 articles critical of Indian pharmaceutical company Bharat Biotech and its Covid-19 vaccination Covaxin. The order came after Bharat Biotech filed a defamation lawsuit against The Wire and 12 people linked with it for ₹100 crore. The court has also barred The Wire, its editor Siddharth Vardarajan, and the individuals named in the suit from publishing any defamatory stories against Bharat Biotech, according to legal portal Bar & Bench.

[BREAKING] In a 100 CRORE defamation case filed by BHARAT BIOTECH, Andhra Court ordered taking down of 14 articles on @thewire_in and restrained

The case has been filed with the Rangareddy Court's XVI Additional District Judge. Senior Counsel K. Vivek Reddy, representing the Petitioner/Plaintiff Bharat Biotech, argued that The Wire had published articles on its website with false allegations against Bharat Biotech and COVAXIN without any truth or proper verification of the facts, causing the Petitioner's reputation to be severely harmed. Bharat Biotech and COVAXIN were falsely accused in articles published by The Wire, according to the companies. Senior Advocate Vivek Reddy, Bharat Biotech's legal counsel, stated that the portal released the reports with the malicious goal of smear Bharat Biotech's reputation. Bharat Biotech had previously developed vaccines for Tuberculosis, Zika Rotavirus, Chikungunya, and Typhoid, which had received national and international recognition, according to Reddy, and has now collaborated with leading Government of India institutions to develop the Covid-19 vaccine, he said in court. The Wire, according to the firm, published a series of articles without verifying the facts about Covaxin authorisation and approvals. Siddharth Varadarajan, Sidharth Bhatia, MK Bhanu, Neeta Sanghi, Vasudevan Mukunth, Shobhan Saxena, Florencia Costa, Prem Anand Murugan, Banjot Kaur, Priyanka Pulla, Seraj Ali, and Jammi Nagaraj Rao are among the defendants in the case. In response to the claims, the court pointed out that The Wire continued to publish anti-vaccine reports even after the government had cleared it. Only the Covaxin has been approved for the age range 15 to 18, according to the court, but the portal continues to post reports that can lead to vaccine apprehension. As a result, the court ordered The Wire to remove the stories from their website within 48 hours, as well as to refrain from publishing any misleading information against Bharat Biotech or Covaxin in the future. The Wire's Editor, Siddharth Varadarajan, took to Twitter to voice his disappointment with the Court's decision, stating that the company was not given the opportunity to refute the Petitioner's baseless allegations.

So 14 deeply reported #Covaxin stories— published over a year—ordered to be taken down by a local AP court with no notice served on @TheWire_in, no chance given for us to refute whatever false claims @BharatBiotech has made against us!

Siddharth Varadarajan, in response to the news, said that a local Andhra Pradesh court ordered the 14 articles to be taken down without giving the portal any notice. He said that no amendment was given to them to rebut Bharat Biotech's "false claims," despite the propaganda articles being "thoroughly reported." The Wire has consistently critiqued Indian pharmaceutical companies like Bharat Biotech and Serum Institute of India since they produced and manufactured vaccines against Covid-19. They've been pushing for apparently 'better' vaccinations from American pharma behemoth Pfizer, and increasing vaccine apprehension by publishing bogus studies about vaccines made in India. Bharat Biotech fact-checked a number of media outlets, including The Wire, last month for propagating false information about Covaxin. The business contradicted a Wire article from December that said no data on the immunological response induced by Covaxin was currently available. According to Bharat Biotech, data on Covaxin's immune response will be published in a number of reputable international peer-reviewed publications between 2020 and 2021. The court ordered that 14 defamatory articles be removed from the website and the Internet within 48 hours. The matter is scheduled to be posted on March 16th, 2022.