“There has indeed been a diminution in our influence in the subcontinent… and the world in general”: Shiv Shankar Menon 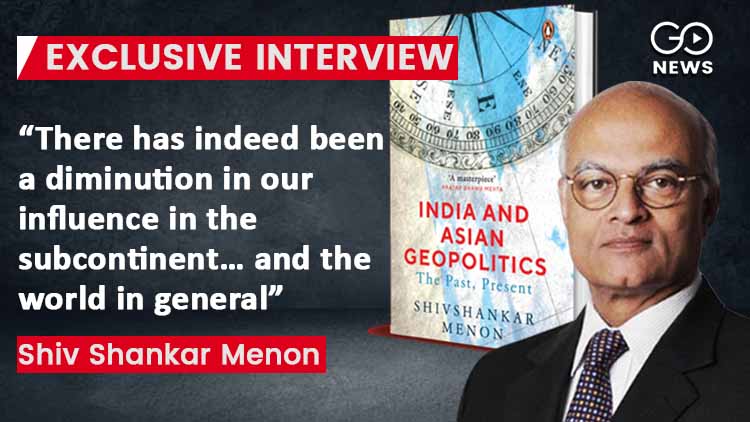 Exclusive Interview: Former National Security Adviser and Foreign Secretary, Shiv Shankar Menon’s recent book, ‘India and Asian Geopolitics: The Past, Present’ has come at an opportune time when the world is witnessing a decisive churn. Insights from the book have been reported globally as a benchmark for understanding the Indian foreign policy in a 'New World' and as a guide for the nation’s policymakers, academics and students. In this interview for GoNews he says that more the country moves away from its founding principles- its inclusiveness, its Constitution, democracy and its pursuit of equality- the lesser will be its influence. Q: When you say that “neither China nor Asia is ready yet for a China-centred order” do you mean that despite its economic heft, China is yet to emerge as a regional power in diplomacy to command respect of other Asian countries?
Also Read:
Oil Slick: Reliance and Other Indian Oil Companies Lose Heft in Fortune500 List

A: What I am pointing to is the fact that China’s political, military and soft power, or power of attraction, is not yet at the same scale as her economic influence. Economically China is a global superpower, but in other respects she is one among many large and influential regional powers in Asia. I find it interesting that in the strategic contention between China and the US, other Asian powers do not follow either Chinese or US preferences in how they deal with the other. That suggests to me that Asian countries are deeply attached to their independence and strategic autonomy. Q: As you describe India as “the ultimate Pivot State”, how did India achieve this critical position in the world order? Due to its peaceful freedom struggle, its inclusive Constitution, its democratic commitments, its pursuit of global equality or its rich cultural heritage? A: In the book I ascribe the term “pivot state” to the classical geopoliticians who saw India as holding the key, due to her geographical position, to control of both the maritime Indian Ocean domain and the Eurasian landmass. I suppose that was true in their time, given the experience of the British Empire and how it used control of India to extend its influence across that broad Asian geography. I myself do not think that India can be pigeon-holed into such neat categories as a pivot state or a balancer or a middle power or some such. Instead, I stress that India needs to keep her strategic autonomy since its interests are unique in certain respects, working with those whose interests are congruent with India’s to achieve our goals. And the factors you mention, such as the inclusiveness, the Constitution, democracy and pursuit of equality, are important elements in India’s soft power, or power of attraction and influence. There more we move away from them the less our influence. Q: In your conclusions you caution that “India is being reduced to a bit player on the international stage. We have lost five years. Our national confidence has been replaced by bravado and extravagant statements.” Is India at risk of losing its pivotal role in the world? A: I think that there has indeed been a diminution in our influence in the subcontinent, the Indian Ocean region, and the world in general in the recent past. Some of this is because of the much harder situation in the world, and the Covid pandemic has diminished both the influence and the prospects of all the great powers. In India’s case this is partly the result of India’s slowing economy, which predates the pandemic, increasing strategic competition in our neighborhood, and some of the policies that we have followed. For instance, India, which had a role to play in Afghanistan in the past, is now watching developments as the US withdraws her troops, as the US president said she would eleven years ago. Q: Post Covid19 Pandemic, the IMF has recalibrated its projections for economic growth for the world where Asia and Emerging Markets -including India- have been downgraded. How do you think this will impact Asia’s position in relation to the West in the coming days? A: I do not think that Covid has diverted the steady shift in global power towards Asia that we have seen in the last few decades. If anything, it has accelerated existing trends. The centre of gravity of the global economy and of geopolitics is now in Asia. This is where the major geopolitical fault line between China and the USA plays out, this is where there is economic gain to be had, and this is where the norms of International behavior are being renegotiated, as we see on the India-China border and the South China Sea. Q: You engage with the youth and the students these days as an educator, which is underlined several times in your book. Do you think we are preparing the next generation with adequate tools to understand and master the complexities of Asia’s role in the future? Is ‘The Asian Century' inevitable? A: I think that we are fortunate that the next generation, at least the ones I teach, are so much better equipped to deal with the world than we were at their age. Their interest in and knowledge of international relations is impressive. Sadly, there is growing inequality of knowledge and therefore of opportunity being created by the present education system and policies. But overall my recent experience at university makes me an optimist about India’s youth and future.