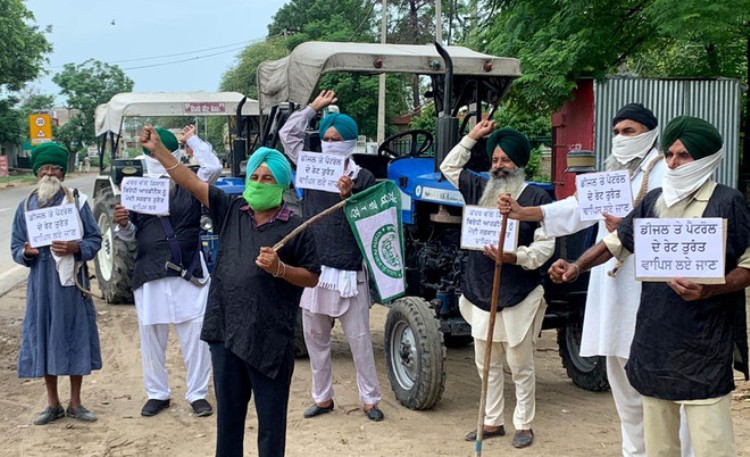 Thousands of farmers in Haryana, Punjab and parts of Rajasthan on Monday took out a ‘tractor march’ against the Central government’s recently promulgated agriculture-related ordinances. Protesting farmers are demanding the withdrawal of the three ordinances, Farmers Produce Trade and Commerce (Promotion and Facilitation); Farmers (Empowerment and Protection) Agreement on Price Assurance and Farm Services; and the Essential Commodities (Amendment). Also Read: Madhya Pradesh Governor Lalji Tandon Passes Away At 85

Farmers say that farm ordinances are “anti-farmer” and will abolish the existing marketing structure. “The Centre should immediately withdraw these Ordinances which are anti-farmer. Their implementation will lead to exploitation of farmers at the hands of big corporate houses. The BJP government has given a free hand to private corporate houses to exploit the farmers,” said Gurnam Singh, the Haryana Bhartiya Kisan Union (BKU) president. Union Agriculture Minister Narendra Tomar says that the Agricultural Produce Marketing Committee (APMC) Act has not been amended for farmers to sell their crops. He said that a new act — Farmer Produce Trade Commerce Promotion and Simplification Ordinance 2020 — has been enacted for traders. Farmers point out that the second ordinance will encourage contract farming which would relegate farmers to the status of labourers in their own fields, which will only benefit private companies and institutions. National Spokesperson of Rashtriya Kisan Mahasangh, Abhimanyu Kohar, said “Through this ordinance, the Central government wants to impose a Western model of agriculture on our farmers, but the government forgets that Indian farmers cannot be compared to Western farmers because in our country farming is a means of livelihood while in western countries it is business.” The Centre has made amendments to the Essential Commodity Act, 1955, which lifts the ban on the storage of all crops like potato, onion, pulses and oilseeds. Farmers outfits believe that it will benefit large companies who will store the foodgrain and sell it at a quarter to one price. Experts say that there are mostly small-medium farmers in our country and they do not have a good system for long-term storage. With this, the corporate class will store and sell them at expensive prices and the black marketing will begin.
TAGS Bhartiya Kisan Union Central Government farmers protest farmers march Farmers Haryana Punjab tractor march Tractor