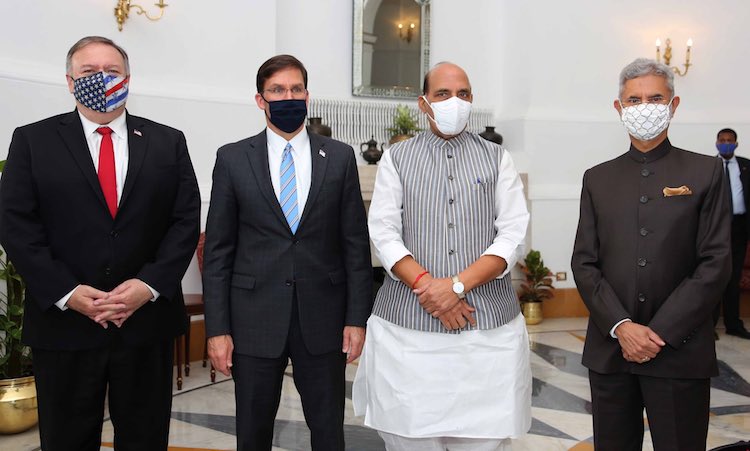 India and the United States signed the long-awaited Basic Exchange and Cooperation Agreement (BECA), a crucial geospatial intelligence-sharing agreement between the two countries, on Tuesday during the 2+2 India-US ministerial meet. BECA will allow India to access the US’s advanced geospatial intelligence and both countries can exchange topographic data including maps, nautical and aeronautical charts, commercial and other unclassified imagery, geophysical, geomagnetic, and gravity data.

BECA is the last of the four ‘foundational agreements’, that the U.S. enters into with its defence partners, struck between India and the US from 2002–2020; the other three are known as the General Security of Military Information Agreement (GSOMIA) in 2002, the Logistics Exchange Memorandum of Agreement (LEMOA) in 2016 and Communications Compatibility and Security Agreement (COMCASA) in 2018.

In layman’s terms, BECA will bolster the Indian military systems with an even more accurate GPS to precisely pinpoint the adversary’s military site; providing real-time updates through advanced US’ advanced geospatial intelligence. The agreement didn’t see the light of the day for years due to privacy concerns raised by the erstwhile UPA government.

BECA agreement comes at a time when India’s relationship with China is soaring and the country is embracing the Quadrilateral Security Dialogue (QUAD), an informal strategic forum between the United States, Japan, Australia, and India.

The first pact, GSOMIA, was signed under the Atal Bihari Vajpayee-led government in 2002 which first allowed both countries to create a framework to official share military intelligence. The second, LEMOA, came during Barack Obama’s historic India visit in 2016 allowing the military of each country to make use of other’s bases: refuel, access supplies, spare parts, air bases, and ports, which can later be reimbursed.

COMCASA was signed in September 2018, following the first 2+2 dialogue between External Affairs Ministers and Defence Ministers of both countries. COMCASA allows the US to provide India with state-of-the-art encrypted communications equipment and systems so that both countries’ military commanders, aircraft, and ships can communicate through secure networks.