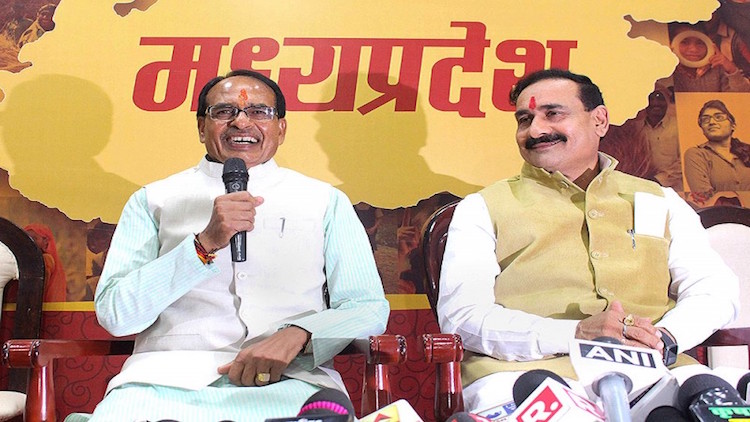 One after another, ministers in the top leadership of the ruling BJP government in Madhya Pradesh have tested positive for Coronavirus. Minister of State (independent charge) minority welfare and rural development Ram Khelawan Patel have also tested positive. Besides, State BJP President VD Sharma has tested positive after getting tested for the third time. His previous two COVID-19 reports were negative. There is an atmosphere of chaos in Madhya Pradesh due to the coronation of Shivraj Singh Chauhan, the head of the government and BD Sharma, the head of the BJP in the state.
Also Read:
Outbreak: Early COVID-19 Cases Linked With Travel To Italy, China And Iran

Statistics show that apart from CM Shivraj Singh Chauhan, three ministers of the state government, Arvind Bhadoria, Tulsi Silawat and Ram Khelayvan are infected. Apart from these, five BJP MLAs Om Prakash Saklecha, Divyaraj Singh, Thakur Das Nagvanshi, Rakesh Giri, and Neena Verma are also in the grip of Coronavirus. Rajya Sabha MP Jyotiraditya Scindia has also been infected. Besides State BJP president VD Sharma, state organisation general secretary Suhas Bhagat, organisation secretary of Bhopal and Gwalior division Ashutosh Tiwari were also found to be COVID-19 positive. In this way, 13 big guns of BJP in the State are in the grip of virus. Sources say the reason behind a large number of BJP leaders in Madhya Pradesh testing COVID-19 positive is the by-elections in the state. Most of the BJP leaders are constantly violating physical distancing rule. Last week, a few hours after Cabinet Minister Arvind Bhadoria joined the cabinet meeting, his report came back positive, but despite this, the entire cabinet including CM Shivraj Singh Chauhan, who attended the meeting of the cabinet did not quarantine himself and that is why the COVID-19 explosion occurred within the Government and the Party.