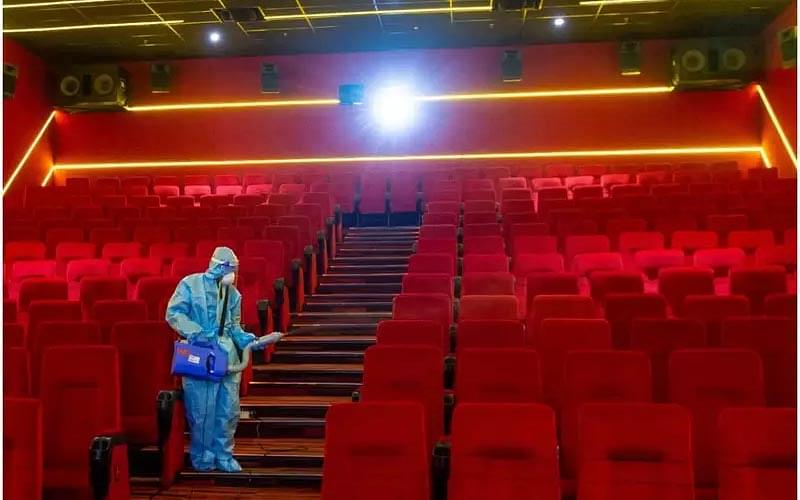 Unlock 5.0 has come into effect from Thursday with several restrictions as COVID-19 cases growth seems to decline for few days running in India. Cinema halls, swimming pools, schools, and amusement parks are now open across the country after almost seven months. The Ministry of Information and Broadcasting has issued detailed guidelines for theaters and multiplexes in a bid to avoid the spread of coronavirus.  According to the rules issued by the Centre, every other seat in the cinema hall will remain empty, only 50 percent of the audience will be allowed inside. Those entering the cinema hall will always have to wear masks. The seat on which the audience is not seated must have a cross mark on it.
Also Read:
'Will Take Back What Centre Snatched': Mehbooba Mufti Freed After 14 Months

To go inside the cinema hall, it is necessary to have the Aarogya Setu App. There will be a complete prohibition on eating and drinking while watching the movie. Only those whose age will be above 6 years and below 60 years will be allowed to enter the cinema halls.  The entire process of purchasing tickets will be online. Entry and exit gate, lobby in the cinema hall will be sanitised from time to time and the cinema hall will be cleaned after every show. It will be the responsibility of the cinema hall management to provide sanitisers to all the viewers. Before the theatres opened, Delhi Chief Minister Arvind Kejriwal met the representatives of the cinema halls and said that he hoped that the hall owners would strictly follow the guidelines of the Centre and the states. He said that following social distancing and sanitisation in the cinema hall is very important. The central government has also approved the reopening of schools and coaching institutes. However, the final decision will have to be taken by the state governments. The consent of the parents is also mandatory. At the same time, many states including Delhi, Maharashtra, Madhya Pradesh, and Gujarat have not yet decided to reopen the schools. However, Punjab has announced the reopening of schools from October 15 and Uttar Pradesh from October 19. If we talk about swimming pools, according to the guidelines issued by the Sports Ministry, only 20 swimmers can train in an Olympic size pool at a time. Swimmers have to provide proof that they are healthy. Apart from this, they will also have to provide a Corona Negative Certificate. On the opening of the park, surfaces that are touched constantly, the empty spaces will be cleaned daily before the park opens and after it is closed. Apart from this, there will be continuous cleaning on other occasions as well. Park management will have to deploy adequate security officers to control the crowd in the park. Tickets will be issued keeping the crowd in mind. Park management will promote online tickets.