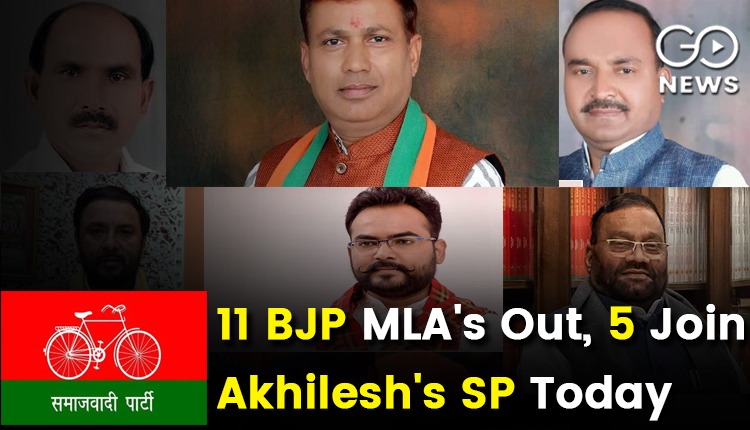 WATCH: UP Polls 2022 | Akhilesh Yadav Shares Stage With New Partners After MLAs' Exodus From BJP This week, there was a political flurry in poll-bound Uttar Pradesh when a total of 11 MLA’s resigning within 3 days from the Uttar Pradesh government, including three cabinet ministers Swami Prasad Maurya, Dharam Singh Saini, and Dara Singh Chauhan.
Also Read:
Indians Spend Over 4 Hrs On Phone, Second Most Game Downloads

Today, Maurya, Saini, along with 5 other former BJP MLA’s: Roshanlal Verma, Brijesh Prajapati, Mukesh Verma, Vinay Shakya and Bhagwati Sagar, along with Chaudhary Amar Singh of the Apna Dal, an alliance partner of the BJP, joined the Samajwadi party today. Maurya claimed that his resignation would be an “earthquake” for the BJOP and would herald the “beginning of the end” for the party in the state. He also said that the BJP had been “deaf to the problems of the backward classes” Rebels Say Exodus For ‘Dalit And OBC’ Issues, BJP Calls Leavers “Opportunists” In all, 10 MLA’s of the BJP and one from the Apna Dal have quit the party and the government of Uttar Pradesh over 3 days. Four MLAs exited on Tuesday: Cabinet minister Swami Prasad Maurya along with Bhagwati Sagar, Roshanlal Verma, and Brijesh Prajapati. This was followed by environment minister and OBC leader Dara Singh Chauhan leaving the party on Wednesday along with Avtar Singh Bhadana who left the BJP and joined the RLD, an alliance partner of the Samajwadi Party in the forthcoming state polls. Yesterday on Thursday, Dharam Singh Saini, the state’s minister for Ayush and MLA from Nakur in Saharanpur, quit the party along with MLA’s Mukesh Verma, Vinay Shakya, and Awasthi Bala Prasad. In their resignation letters posted online, the MLA’s have said that the BJP’s persistent ‘neglect’ of the issues of Dalits and OBC’s in the state led to their decision. Speaking to news chanle NDTV, Shakya said that the resignation was being planned since 1.5 years, and that “one minister will resign every day until the 20th [of January]”. On the other hand, the spokesperson of the BJP’s state unit said: “The BJP is going to contest the upcoming UP elections under the leadership of Chief Minister Yogi Adityanath and Prime Minister Narendra Modi. We are going to reach out to people showing the work done by the double-engine government. Those who are leaving the party after the announcement of the Model Code of Conduct are opportunistic people and like many others in the past who have left the BJP for selfish reasons, they will be rejected by the people. We are confident that we will form the government in the state like we did in 2017 with absolute majority.”