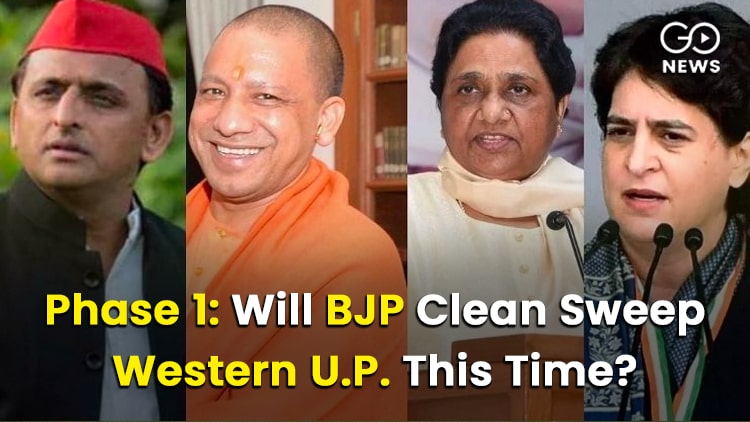 Voting in the first phase of the Uttar Pradesh elections is underway today for 58 constituencies across 11 districts. The first phase of the elections in Western U.P. is considered crucial for the Yogi Adityanath-led BJP which is incumbent in the state, because it had pulled off a “clean sweep” in this region in 2017 and had won more than 90% seats from this region. In the first phase of the 2017 elections, the BJP had won 53 out of the 58 seats in this region, representing a little over 91%. The Samajwadi Party (SP) and Bahujan Samaj Party (BSP) led by Akhilesh Yadav and Maywati respectively had managed to secure only 2 seats each, whereas the Rashtriya Lok Dal (RLD), which is contesting in alliance with the SP this time, had won 1 seat.
Also Read:
Poor Indians At Risk in a Volatile Stock Market

At that time, it was clear that he BJP had simply swept away the opposition, and it had secured 23 seats in this region with a margin of over 20%, whereas it won 18 seats with a margin of 10-20% and another 12 seats with a margin of less than 10%.   In the first phase of the UP Elections in 2022, voting is scheduled for:   Battleground Western U.P. As BJP Seeks To Repeat 2017 Clean Sweep Of Region Akhilesh Yadav and Jayant Chaudhary’s parties, the SP and RLD, are contesting the polls in alliance this time, which may prove to be a challenge for the saffron party currently ruling in Lucknow. If the alliance is to succeed in ousting Ypgi from power then it ha to perform well in he first phase, which is being condudcted in a region considered as a farmers’ stronghold politically. The BSP also emerged as a significant problem for the BJP in 2017 in at least 33 seats. The Samajwadi Party was a runner-up in 15 seats, the Congress in 5, and the RLD in 3 seats. It is being said that the situation on ground does not favour the BJP this time around in 2022 and the Jat community being upset with the ruling party can provide a fillip to the SP-RLD alliance in this region. Even the SKM (Sanyukta Kisan Morcha), the umbrella body of farmers that led the farmers’ agitation in 2021, has launched an appeal of “No Vote To BJP” in Uttar Pradesh and Uttarakhand. In 27 of the 53 seats of 2017, the victory margin of the BJP was less tha the votes tallied by the party in the third place, and the splintering of opposition votes in many places helped the BJP to consolidate its power, in turn. In this election, Mayawati’s BSP has broken from the SP once more and is contesting alone. In 2017, it was the second biggest party by vote-share in the first phase of polling. The BSP is said by many to be a ‘B team’ of the BJP as it openly appealed to its voters during bypolls to vote for the BJP and defeat the SP. The first phase will also decide the fate of Shrikant Sharma, Suresh Rana, Sandeep Singh, Kapil Dev Agrawal, Atul Garg, and Chaudhary Laxmi Narayan who are presently cabinet members in the Yogi government. It remains to be seen whether the party can maintain its apex position in Western U.P., or if the stage is being set for a major upset.