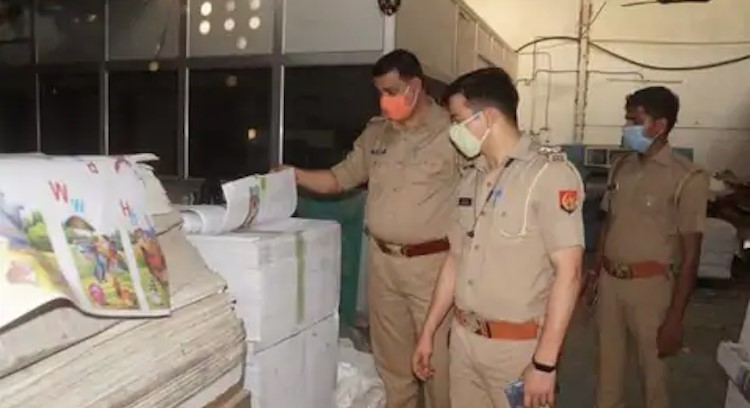 NCERT books worth Rs 35 crore and six illegal printing machines have been seized from a godown in a raid by UP STF and Meerut Police. In the initial investigation, it is revealed that the mastermind of printing fake books is Sachin Gupta, son of Sanjeev Gupta, leader of Meerut BJP, and is on the run. SSP of Meerut Ajay Sahni said that 12 people have been detained till now.

Meerut: A joint team of UP Special Task Force & local police seized illegally printed NCERT books during a raid at a godown in Partapur. Ajay Sahni, SSP says, "Books worth Rs 35 crores & 6 printing machines have been seized. 12 people have been taken into custody." (21.8) pic.twitter.com/B9lubmOKHS

When the team of Meerut Police and STF reached the illegal printing press, the name of Sanjeev Gupta was written on the BJP flag, who is the vice-president of the Meerut metropolis. Sanjeev Gupta has also been the convenor of the Gandhi Sankalp Padyatra Meerut-Hapur Lok Sabha. The printing of fake books was discovered when its consignment reached the Army School. The Army Intelligence investigated it at its level and reported it to the UP STF. After this, the process of action started. Questions are also arising as to how illegal books were being printed on such a large scale under the nose of the Meerut Police. The NCERT books confiscated in the raid were printed for 2nd to 12th class. From here, STF has got the addresses of booksellers of all the states of the country. According to STF, pirated books were being sold in Delhi, Uttarakhand, Haryana, Madhya Pradesh, Punjab, Jharkhand, Bihar, Jammu Kashmir, Karnataka, Telangana, Rajasthan, Maharashtra, West Bengal besides Uttar Pradesh. It has also been learned in the investigation that mastermind Sachin Gupta has also printed fake books of UP Board. Sellers get a commission of up to 30% on selling fake books, while on real books the same commission is 15%.