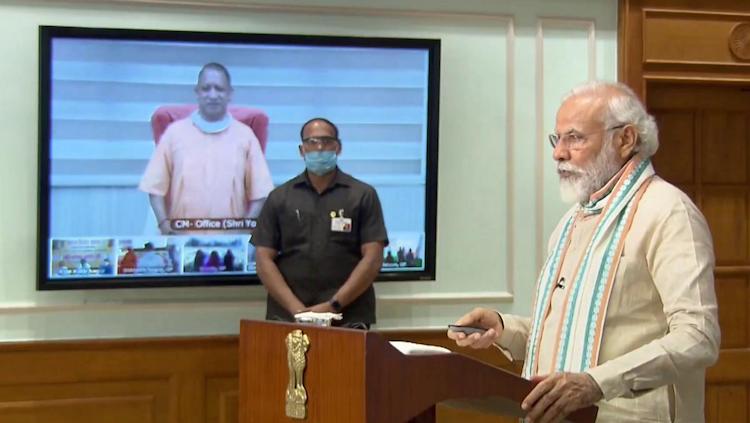 In order to provide employment to millions of workers who migrated from metros during the lockdown, the Central Government has started a self-sufficient employment campaign. On Friday, Prime Minister Modi launched this campaign in UP through video conferencing. During this, he also interacted with the migrant labourers of Gonda, Bahraich, Sant Kabir Nagar, Gorakhpur, Siddharthnagar and Jalaun districts of Eastern UP.

This scheme will be implemented in 31 districts of eastern Uttar Pradesh, out of which 26 Lok Sabha seats were won by BJP in the 2019 general election. Backward districts like Bahraich, Shravasti, Balrampur, Siddharthnagar, and Fatehpur have been included in the plan but Chandauli, Chitrakoot and Sonbhadra falling in the same category are out of its purview.

Surprisingly, Western UP has been completely deprived of the scheme where the BJP lost many seats in the 2019 general election. The goal of this scheme is to give labourers work near their homes and to promote entrepreneurship. Also, industrial organizations and important institutions will also be added to create employment opportunities.

CM Yogi Adityanath, who was also present during the scheme launch, claims that 1.25 crore people will be given employment under this scheme. For providing employment, works like public toilet, PM Awas Yojana, road construction have been included. According to an estimate, 3.5 million workers in UP returned from different states during the lockdown.

Adityanath said that under this, 60 lakh workers will be given work every day. But the biggest question is why Purvanchal districts have been favoured more in this scheme. Is it because both PM Modi's parliamentary constituency Varanasi and CM Yogi's home district Gorakhpur are in Purvanchal?