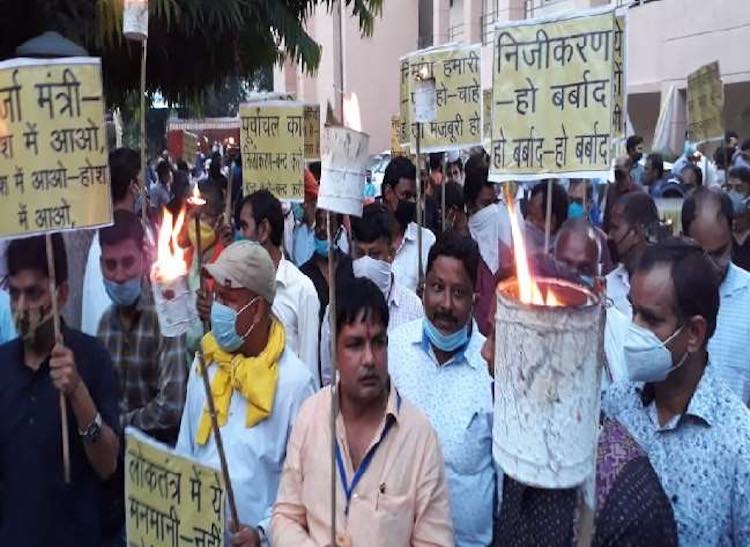 Uttar Pradesh Power Employees Joint Action Committee (JAC) took out a torch rally against the privatisation of power distribution companies across the State. Demonstrators were seen shouting slogans against the privatisation move in PM Modi's parliamentary constituency Varanasi and CM Yogi's home district Gorakhpur. Protesters allege that on 5 April 2018, an agreement was reached between the State Power Minister Shrikant Sharma and the Power Employees Joint Action Committee, that the power distribution companies would not be privatised, but now breaking the deal, they have moved towards privatising the Purvanchal Vidyut Vitran Nigam (PuVVNL), also known as Varanasi discom (distribution company). The Committee says that the model of privatisation and franchise has failed in Greater Noida and Agra, then why the Yogi government wants to use a failed model again and again.
Also Read:
Bhagat Singh Birth Anniversary: Remembering India's Revolutionary Son Through His Quotes

Power distribution companies in the country are running in the biggest losses in Uttar Pradesh. According to the UDAY portal of the Union Power Ministry, as of March 2020, five discom companies in UP incurred a loss of Rs 819 crores. There are a total of five power companies in the state, out of which Meerut-based Paschimanchal Vidyut Vitran Nigam and Kanpur Electricity Supply Company are making a profit while Dakshinchal, Madhyamachal and Purvanchal are suffering losses. According to the portal, Purvanchal Vidyut Vitran Nigam has suffered the maximum loss of Rs 1,550 crore. The Yogi government also made electricity expensive in the state, but in spite of this, losses continue to mount. In Purvanchal alone, there are high profile parliamentary constituencies like Gorakhpur and Varanasi, which are BJP-dominated. The Yogi government argues that Purvanchal Vidyut Vitran Nigam is continuously running in losses and through privatisation, it can be free from losses. Meanwhile, the power employees say that the decision to privatize is neither in the interest of the employees nor is it going to benefit the general public. The protesters have warned that if the government does not withdraw its decision, then there will be a large-scale agitation in the state.