Voters in Uttar Pradesh are less enthusiastic this time than 5 years ago when the BJP fought the election in the name of its popular Prime Minister Narendra Modi. During the seven phases of the elections, the voting percentage has been nearly flat compared to the elections held in 2017. The contest this time is clearly between the Samajwadi Party of Akhilesh Yadav and incumbent Chief Minister Yogi Adityanath’s BJP, which pitched the battle on the slogan of a “double engine government” meaning both Mr. Modi and Mr. Adityanath will steer the state in the future.
Also Read:
Media In Crossfire Of Russia-Ukraine Conflict, Both In Europe And Russia!

Interestingly. the polling percentage declined during the first two phases of the elections in the areas where the BJP had a near clean sweep during 2017. In the first phase, voting was 1.04% less and in the second phase, it was .87% less than the previous elections.

In these two areas bordering Delhi NCR, the farmer's agitation had a strong impact on the electorate as many who gathered at Delhi’s borders were farmers from these areas. It is difficult to say what impact this low turnout will have on the final results which will be announced on the 10th of March. Interestingly, in each of the first 6 phases, women voters did not come out to cast their votes as they did in the 2017 elections which gave the BJP a clear mandate with 316 seats in the assembly of 403 members. Women voters had outnumbered their male counterparts during the 2017 elections in some areas as much as 12% percent during the 2017 elections. Especially in the eastern parts of the state where the male population is usually working as migrants in other towns, women traditionally participate more in the polling. This time around, similar enthusiasm is not seen among the voters. 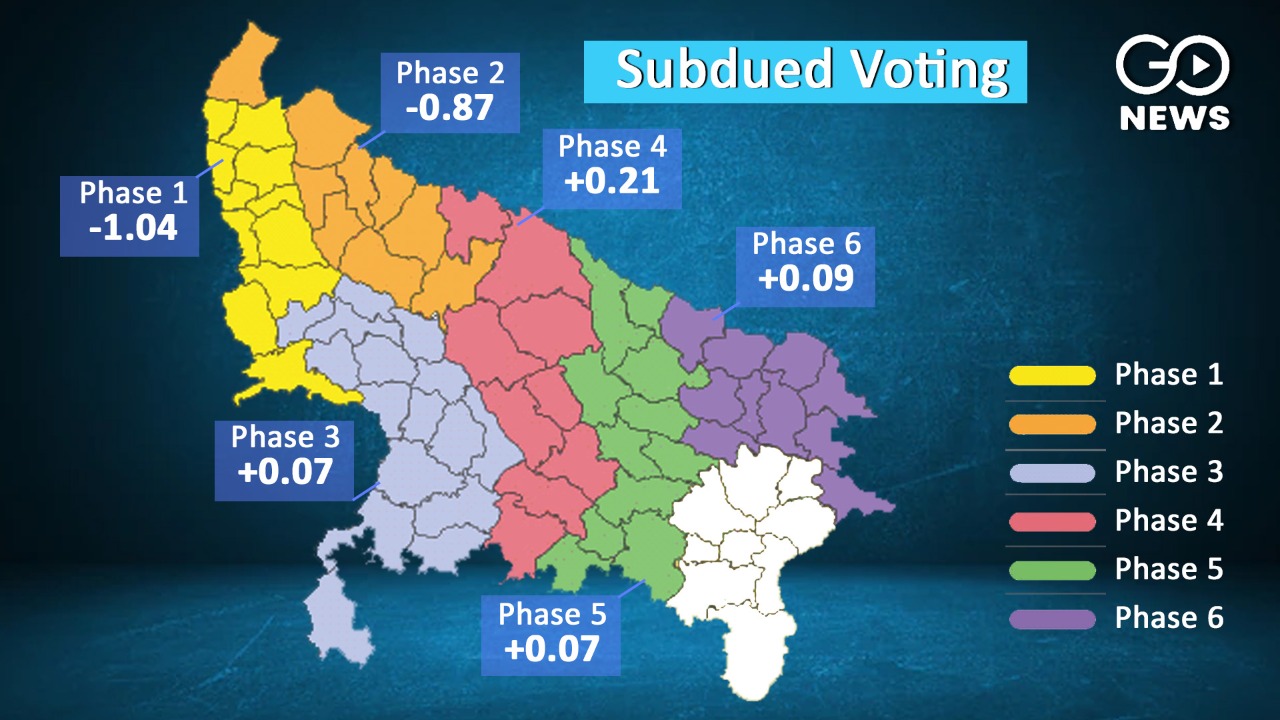 A detailed analysis of the polling pattern indicates that despite a high-powered campaign by the Congress leaders Priyanka Gandhi on the slogan of “Ladki Hoon Lad Sakti Hoon” women's participation is less. The Congress fielded 40% women candidates throughout the state expecting that it will garner the women's votes. Pollsters have been commenting that if Congress weans away women's votes from the incumbent BJP, it will play in favor of the opposition parties if the margin of victories reduces.  Exit polls have painted a blurred picture of how the UP has voted in this election. Only a final count of the EVMs will reveal the real picture on March 10th.