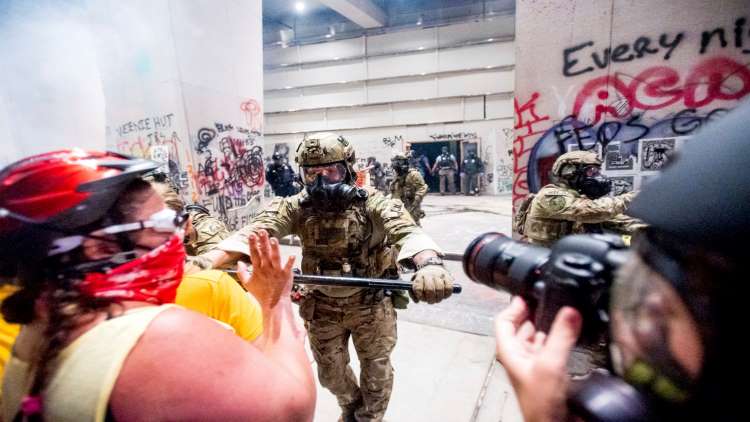 U.S. federal law enforcement agencies must ensure that journalists can cover protests freely, and must refrain from attacking members of the press, the Committee to Protect Journalists said on Friday. “All law enforcement agencies must stop using aggressive tactics against journalists covering protests in the United States,” said CPJ Program Director Carlos Martinez de la Serna. “Journalists in Portland should not have to worry about being targeted by federal agents while doing their jobs.” Also Read: 44% Families in Delhi-NCR Took Loan For Home Expenses During Lockdown: Study

On July 20, unidentified law enforcement agents shot freelance photographer Jungho Kim with a pink marker round, a nonlethal rubber round that leaves a paint residue on its target, while he was reporting on ongoing protests against police brutality and racial injustice around the Justice Center in downtown Portland, Oregon, he told CPJ in a phone interview. Kim told CPJ that “there were no protesters around” and he was wearing a yellow reflective press vest and a full-face respirator when he was shot. He posted a photo on Twitter showing that he was clearly identifiable as a journalist. Kim told CPJ that he was unable to determine who fired the round, and said that the only uniformed officers he saw in the area were with the Department of Homeland Security, Customs and Border Protection, and the U.S. Marshals, all federal law enforcement agencies. Also on July 20, a federal agent punched New York Times reporter Mike Baker in the head, knocking him to the ground, Baker wrote in a report for his employer. In the early hours of July 21, Portland Tribune photographer Jonathan House tweetedExternal link that he was shot by a rubber round while federal agents cleared a crowd in the city. House told the TribuneExternal link that he was wearing a press badge and carrying several large pieces of camera equipment, and said, “this felt like the first time that I was specifically targeted.” Yesterday evening, a federal judge issued a 14-day orderExternal link blocking law enforcement agents from arresting or using physical force against journalists. When CPJ emailed the Department of Homeland Security for comment, a representative referred CPJ to a statement from Customs and Border Protection that did not mention attacks on journalists but said that “violence and civil unrest will not be tolerated.” When CPJ called the U.S. Marshals, an automated message said to call a different number; when CPJ called that number, a representative took CPJ’s contact information but did not respond to any questions. Federal law agents have patrolled Portland streets in unmarked vehicles and detained protesters since at least July 14, according to Oregon Public Broadcasting.
TAGS press freedom violations US press freedom Press Freedom Portland Committee to Protect Journalists journalists US Federal Law officers