When Will Govt Increase Petrol-Diesel Prices? 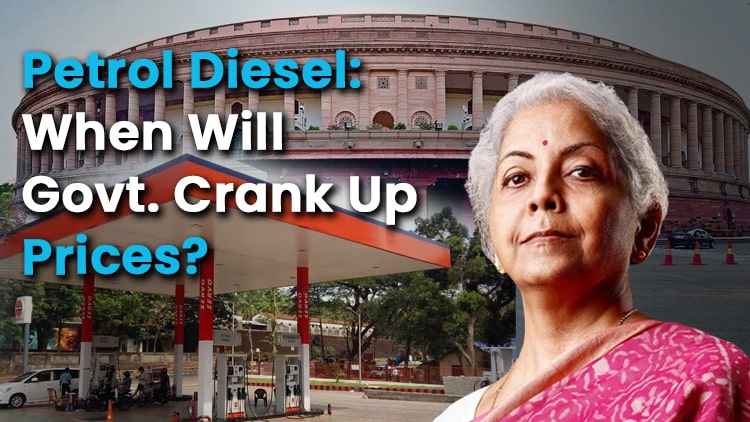 Anyone who is affected by the hike in petrol and diesel prices is waiting with bated breath when will the fuel prices will increase as the price of crude oil has increased massively after Russia attacked Ukraine. In India the fuel prices have not increased in the last four months reportedly due to elections in the 5 states. Since then, global crude oil prices have increased about more than 35%. In the US, the largest producer of oil in the world, prices have escalated almost 40% as the pricing is adjusted daily to the global market. Stand-up comedians are joking that after the pandemic, they are taking their families to “expensive places” like the petrol stations. Russia is the third largest producer of oil in the world, and US and European sanctions have led to a spiral in global oil prices.
Also Read:
UP Final Results: BJP's Return, Good Edge To SP!

 In India, the prices are supposedly linked to the global pricing but as 90% supply is in the hands of public sector oil companies, the government can still control the price. So, an increase in the prices is inevitable.  First, let us have a look at how India stands on oil production and consumption. As a growing economy, India needs more fossil fuel to cater to an ever-increasing mobility of people, better incomes lead to more purchases of vehicles and resultingly more oil is needed to keep the wheels turning. In the last seven years, oil imports have increased from 210.7miilion metric tons to 270.7 mmt till 2019-20. As most private vehicular traffic came to a halt during the lockdown, the imports dropped to 239.7 mmt in 2020-21. But on average India’s oil needs increased nearly 10% per year before the pandemic. But surprisingly, the country made no efforts to increase its domestic oil production which is mainly under the government control. The sate owned companies bought more oil each year from outside even though in 2015 the Central Government launched its self-sufficiency campaign under “Atma Nirbhar Bharat” banner with much fanfare. The production of oil decreased from 37.4 mmt in 2014-15 to 30.5 mmt in 2020-21. A massive drop of more than 20%. This gap in imports and production has led to a record higher trade deficit in the country as nearly 50% of the trade bill constitutes the import of crude oil. The only significant trend during the last 8 years has been India’s shift to prefer US oil than the imports from the Middle East. Now that the price increase and resultant deficit is staring the government in its face, the timing of domestic retail price increase has become more difficult. The Parliament is in session and discussions on the budgetary allocations are continuing. The government has already asked for an increase of Rs 1.4 lakh crore after placing the budget on February 1st. If it increases the price of the fuel during the session, it will come under aggressive attacks from the opposition benches. As it stands, the Wholesale Price Index inflation is already at 12.96% in January, and the government does not want to provide the opposition with further ammo.   In addition, its proposals for revenue and expenditure will have to be recalibrated which are still under discussion in the Parliament. So as the country waits for a fuel price increase, the quantum of the increase will be determined by global oil prices and will cause a one-time impact on the consumer rather than a gradual incline or decline. The Parliament session will go on till April 8th and perhaps we all have to wait till then.