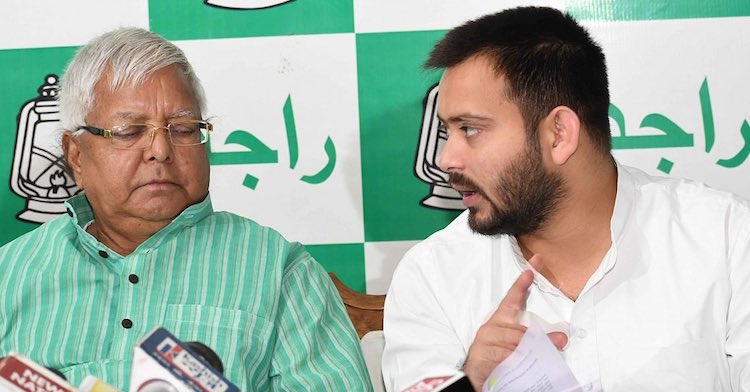 The Bihar Assembly elections are around the corner and Tejashwi Yadav is holding public rallies. In his rallies, he is neither using the picture of his father Lalu Yadav nor his mother Rabri Devi. On this, the NDA Alliance is attacking Tejashwi by focusing on Lalu's fodder scam. On the other hand, Tejashwi Yadav is maintaining enthusiasm in public with the help of his father's name. Tejashwi Yadav said in his rally on Friday, "Lalu ji is getting released on November 9. He has got one bail and on November 9 he will get another bail. And Nitish Kumar’s farewell is on the next day.” Also Read: Air Quality Dips To ‘Severe’ Category In Delhi-NCR

Recently the Jharkhand High Court granted him bail in one case related to fodder scam but he could not come out of jail. Hearing on his bail plea in another case of scam is still going on and the court has fixed date for next hearing on November 6. In fact, it was only after Nitish Kumar shifted alliance that the CBI court gave its verdict in the alleged scam case on Lalu Yadav, sentencing him to 14 years imprisonment. In the last assembly election, Lalu Yadav held a massive public meeting and played a big role in giving the party a big victory. It is said that if Lalu Yadav merely sits on the stage, a sea of people gets drawn in the rallies. In the last election, both the major parties of the state RJD and JDU contested together. While Nitish Kumar sought votes in the name of his development model and liquor ban, Lalu Prasad was mobilising Muslim-Yadav voters. The RJD emerged as the single largest party with 81 seats in the election and JDU of Nitish Kumar won 70 seats. Both parties had fielded candidates for 101–101 seats each. A look at the Election Commission data shows that there are 110 assembly seats in the state which are Yadav-Muslim majority. According to the data, 16% of voters in the state are Yadavs and 17% Muslims. Both these communities are considered 'kingmakers' in the state and both Lalu Yadav and Nitish Kumar are dependent on these communities. Lalu Prasad, a Yadav himself, has his traditional 'Yadav' vote bank. At the same time, he has created his image as a secular leader, so Muslims always supported him. In the last assembly election, RJD fielded Yadav candidates in 48 seats, of which 42 won. At the same time, Nitish Kumar, who was part of the Grand Alliance, fielded Yadav candidates in 12 seats, of which 11 were won. This time JDU has given tickets to its Yadav candidates in 19 seats and RJD in 20 seats. Currently, the Bihar Legislative Assembly with 243 seats has 61 Yadavs and 24 Muslim MLAs. However, it is believed that a one-sided equation can also be seen in this election. Experts say that in this assembly election, Tejashwi Yadav is targeting these two voters and he seems to be successful in this. Experts also believe that there is an anti-incumbency wave in the state and in such a situation, Muslim-Yadav voters are seen to be united which can prove to be a great success for RJD.
TAGS Nitish Kumar fodder scam Bihar elections 2020 Bihar Elections Bihar Assembly Election Lalu Prasad Yadav Tejashwi Yadav